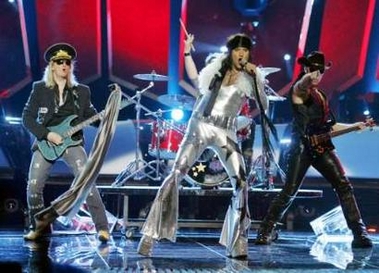 This is the fun bit. I have to use my skill and judgement to find the path through the maze of mixed signals The Boys have been giving me over the last few days. So there’s a bit of everything in here, but let me draw you, as I see it, the path from binners to winners…

25: Belgium. Big as it is, it just seems out of place, and hasn’t really taken off throughout the rehearsals. Apologies, Belgians, but this is the third year running I’m predicting a disastrous result for you. It would only be the second year running that I’m right! Chance of qualifying: 5%

24: Bulgaria. I really hoped this would come through in rehearsals with a performance that would make people notice it, but it just seems to be drab drab drab. Not last solely because, in the words of the old song, this is when good neighbours become good friends. Chance of qualifying: 5%

23: Latvia. Another horrible disappointment – it needed simplicity and sincerity, it appears to have got silly instead. Still one to listen to on the CD, but what a letdown! Chance of qualifying: 10%

22: Portugal. I feel a bit mean putting this so low – it’s a much better effort than last year, but a bad draw and reports of absurd headwear may well have put paid to its chances. Chance of qualifying: 10%

21: FYR Macedonia. Never the most popular of tracks at the best of times, and it seems that Martin hasn’t really done anything to lift it out of the doldrums. Chance of qualifying: 10%

20: Denmark. Seems to be one of those countries that really struggles for votes these days. Nothing too much wrong with Jakob’s performances, by the sounds, but I just feel the song isn’t strong enough to break through. Chance of qualifying: 15%

19: Andorra. Certainly the strongest of this batch, and in another year it’d be higher up. But the performance sounds too busy, Anabel Conde on backings sounds like she’s too… Anabel Conde, and Marian has her work cut out. Chance of qualifying: 20%

18: Lithuania. I’m tempted to have this higher – as a rule of thumb, whenever OnEurope reports that something is “good – but who’s going to notice it?”, it nearly wins. But I share the view that it’s not a song to break out of the nasty 2nd position. Chance of qualifying: 25%

17. Slovenia. There are just tiny little sniffs in the reportage that Omar is reaching a peak, he has a good draw and the kind of performance that could stop the televoters in their tracks tonight. But I can’t bet on it. Chance of qualifying: 25%

16. Finland. Got to be Finland’s best entry for years and years, a strong performance, Geir seems to look good on stage… but it’s Finland, and for some reason they just never attract the votes they deserve. Chance of qualifying: 30%

15. Estonia. If not for the fact that the Estonian vote has badly dried up since Tallinn 2002, I’d put this higher. But by all accounts it’s a bit shouty, and the slot immediately before Norway is hardly a dream draw. Chance of qualifying: 40%

14. Monaco. This is a song that really sounds like it’s broken out during rehearsals – I didn’t really rate it a week ago, but I have to take the good reports into account and put it somewhere near the line. Chance of qualifying: 40%

13. Ireland. What hasn’t been said about the ginger ninjas over the last few weeks? Joe is beyond a doubt the star of this Eurovision, and one of the biggest reasons I’m thinking “OK, maybe I should have turned up”. Most accounts indicate that the naffness works – but I fear not quite well enough. Chance of qualifying: 40%

12. Austria. I’m surprised at how little interest this one seems to have aroused – clearly they do what they do, and do it perfectly well, well enough to attract quite a few votes. I can’t see it having the full cross-border appeal to grab every corner of Europe though, and that will stall it. Chance of qualifying: 40%

11. Israel. Somebody has to be the one who just misses out, and it’s going to be hard on them. But Israel… right in the middle of a “too many female ballads” section of the draw looks like being robbed of a Saturday place by a mere whisker, to me. Chance of qualifying: 40%

10. Belarus. Angelica Agurbash is trying everything she can think of to win this thing, and my gut feeling is that she may have thrown too much at this performance. I still don’t think that her voice ultimately suits this song, but I think it’s got enough about it to qualify… and fall straight back into the 2006 semi. Chance of qualifying: 45%

9. Romania. So many mixed signals about this one. Is the song really that strong? Might there be too much going on? It’s hard to say, but as Andy Mikheev rates it very highly and he seems to understand East Europe, I’m going to put it in the top 10 by a smidge. Chance of qualifying: 50%

8. Croatia. Something Balkan will qualify – I think we can take that as a given. I don’t think it’s going to be FYR Macedonia or Slovenia, so that only really leaves Croatia. Quite apart from which, it’s a good song and deserves to qualify. I wish the reports about the drummer weren’t so unnerving though… Chance of qualifying: 50%

7. Hungary. I really expected to have this higher up, but the ground seems to be crumbling a little under the Hungarian feet. Comparisons to Ruslana now seem a long way away, as this is not so much whips and chains as t-shirts and country dancing. Wouldn’t totally surprise if they miss out. Chance of qualifying: 50%

6. Iceland. I thought this was a stone cold certainty to qualify, but once again I’m sensing tiny little doubts from the Kiev crowd… this semi-final is a sea full of ravenous piranhas, and no place for any kind of slip up at all. Should still make it though, but it might turn out to have been hairy. Chance of qualifying: 60%

5. Netherlands. As much as this style doesn’t appeal to me, it was an instant hit among fans when it was first chosen, and is definitely a song that can be immediately loved. I think that’s probably enough, but I’ve been wrong before. Chance of qualifying: 70%

4. Poland. Catchy, singalong, repetitive-yet-interesting-enough, strikingly performed, and right at the top of the bill. What more can you ask for when all you need is to finish in the top 10? Chance of qualifying: 70%

3. Switzerland. The first rehearsal last Friday totally spooked me – all this seems to prove is that you can’t rely on first rehearsals. Strengthening towards the big night, pushes all the right buttons in the right parts of Europe and should canter into the final. Chance of qualifying: 75%

2. Moldova. I’m getting Ruslana-vibes. The granny gimmick might not have worked but apparently does, the missing energy from the CD recording seems to be back in spades, and the group is known and popular in substantial chunks of the voting region. Chance of qualifying: 85%

1. Norway. Eurovision fans don’t agree about anything, but they all seem certain in Kiev that Wig Wam are rockin’ da house on a thoroughly reliable basis. Looks like the semi-final winner to me. C’mon, c’mon, c’mon!!!! Chance of qualifying: 90%

That seems to be the size of it. And I’ve even made the maths work out properly this year… I’m trying to fit ten songs into a ten-song-shaped box. Go me!

See you after the semi-final, folks, and enjoy the show!