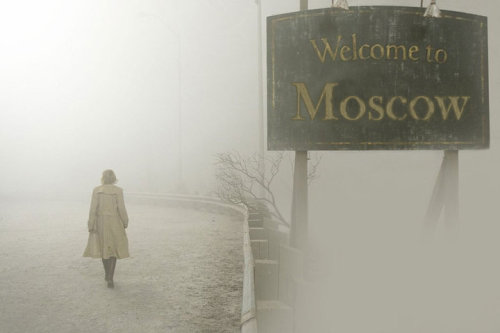 Of course, it’s not all sitting in a dark hall and watching a middling to poor panopoly of European dance and song. Well, not for me and Our Catherine, at least. No, we’ve been off around town (well, after we finally managed to escape from the clutches of the Belgian-eating accreditation queue, that is!)

First stop was the magnificent VVTs. Nothing more than a footnote in most guidebooks, this former Soviet expo centre is a marvel for the eyes. Nestling in a massive park, just the other side of the majestic Cosmonaut Memorial (and man that looks fab!) , the VVTs harbours a bumper crop of enormous Pavilions, all built to celebrate the wonders of various Soviet republics and state industries. Now mostly past their best and crammed with market stalls flogging the most obscure trinkets known to commerce – and quite a lot of saplings too – this is the place the locals come to promenade and peer on a sunny Saturday afternoon. Rollerblades abound, and families stroll, dance and argue among the fountains and crumbling edifices. I’d advise any of you coming to Moscow in the later stages of the fortnight to spend at least an hour of so up there. It’s only a couple of stops up the line from the arena, and you’ll thanks us for it in the end.

In the evening, after herself had her nap, we felt in need to some noisy joys, so we had ourselves off to a club called Sve Vsoi, over behind the zoo, to watch some local punky acts, plus a fabulous Italian headline band called Kalashnikov, who were a pure joy from start to finish. Their set was a beautiful chaos from start to finish as their electrical stuff collapsed, exploded, fell to bits and made funny noises, while the local kids, not a single one looking much over 20, went politely berserk. I’ve been going to watch bands live all over the world for over 30 years, and this was genuinely one of the most enjoyable shows I’ve ever seen. You won’t like them, but look them up on MySpace for a look at why we think they were so fab.

And it was a lovely stroll back from the venue. Wide boulevards and squares flanked by all-night flower shops and convenience kiosks, with a kind of friendly drunkenness among the tottering locals. I think that may have been a posh bit, but I’m sure we’ll find the scummy end of town before too long.

Not a bad city so far from the limited amount we’ve already seen. And we’re finally off for a nose around Red Square in a bit. I suspect we’re going to like this place.