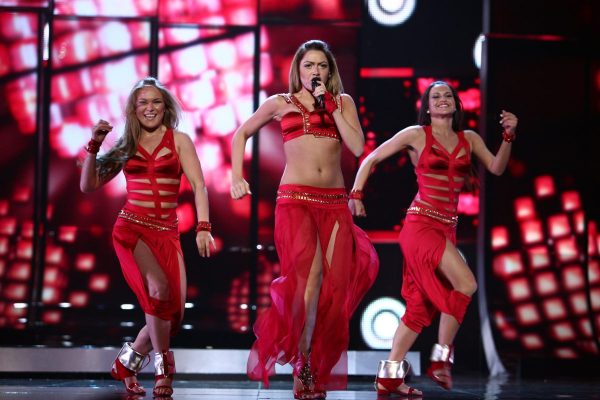 It’s actually quite a relief just to be watching one final run through from each session, rather than trying to give each song 40 minutes of attention when some of them *whisper* don’t entirely merit it.

Montenegro, I think, have fundamental problems – two people really aren’t enough to make that performance shout out from the opening draw. TV angles may, of course, give us a totally different picture. But it doesn’t look like a strong package so far.

Czech Republic will probably be a bit shocked that the pop art graphics have proven to be quite as “in your face” as they are. They could quite easily be restricted to the top ring of screens and leave the main backdrop more neutral, and would probably be pretty effective. I’m not going to rule out this one causing a surprise.

Belgium next, as far as I’m concerned, and it seems that what we see isn’t what we get. I read elsewhere that Pat’s press conference confirms that the Copycat will be putting in an appearance later in the week. This probably explains why things were looking a little bland, but I’m not entirely happy with the vocal performance either. Work to be done, and this jury’s still out.

Belarus is a positive surprise to me. It’s the first one that looks totally right and “authentic” on stage, and might get rewarded for it. The lady in the sheet is a bit disconcerting, but definitely pulls some nice shapes. Could easily sneak through into an envelope, based on the Youtube.

Sweden… *could* be in trouble. They look like they’ve totally misunderstood what went wrong in 2008, and have kept all the bad elements and added some new ones. It’s all shiny and clinical and ice cold – and Eurovisionia just doesn’t seem to have fondness for “clinical”, even when it’s deliberate. Possible that it’s going to be dead in the water one line into the first verse if it’s not careful, with no chance to recover.

Armenia’s fine. Nice solid performance and it’s sailing through unless the final stage costumes are very very silly indeed. I haven’t ruled that possibility out, but it seems unlikely.

Andorra seem to have come up with relatively sane silly stage costumes this year. I like what I’m seeing, I think the 07 dot displays are a nice touch, but was that a Crombyesque gurn into the camera I spotted on the monitor near the end? That kind of thing rarely plays well!

Switzerland is doing as much as it can, a proper band playing it very straight… the mountainous backdrop screams Switzerland in a tasteful and subtle way… but I’m still not convinced by the strength of the song. Perhaps there’ll be enough people watching who like That Kind Of Thing a week on Tuesday, we’ll see.

Turkey looks safe as houses. It’s what Terry Wogan would call “a typical Eurovision song of the nillies” if he were still about, and he’s right. Most bookies reckon it’s the only thing that stands a serious chance of breaking up the Norway/Greece stranglehold on ESC 2009, and most bookies may well be right.

Turkey, Armenia and Belarus are my Big 3 for the day; there’s nothing totally disastrous in the other six, but I think Montenegro and Sweden are the two that are least likely to be relaxing tonight after their sessions. Belgium have a lot of work to do to finalise their performance, but it seems that was always in their game-plan.

Good day’s work, everybody! Only another 13 to go and then you can come home again 🙂