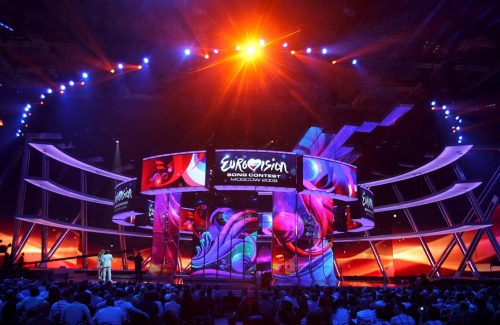 Montenegro – With the exception of a new shorter better frock and the addition of a chair prop, this hasn’t changed much since the first day of rehearsals and for that reason Monte Negro should be very worried. Our male dancer’s trousers need a bit of a iron as they are looking a bit ragged after all the times he’s worn them. I’m thinking they’re sunk and going home.

Czech Republic – It’s quite clear that the audience have no idea what to make of this. Much as I love it, it’s not going to be their first appearance in the final. Applause somewhat muted.

Belgium – The lighting on this is great but that’s about all. The vocals are a bit suspect at times and close up of his face are likely to off-putting to voters. I’m thinking third non-qualifier in a row.

Belarus – the music didn’t start on time. Camerwork good and lighting perfect. Petr is the first performer who has tried to engage the audience so far. The woman with the curtain is very effective. This is looking very good and I’m thinking first contender for qualifier. Big reaction in the hall.

Sweden – The lighting and camerwork on this ar terrible. They’re obviously trying to avoid the mistake they made last year with Charlotte and close ups of her “work”. Malena has similar problems but making the background glaring white whilst she is weraing a white dress is a really bad move. The vocals have improved but the overall effect is like Hero from last year. The crowd seem to quite like it but I’m thinking only a jury could save it and they just might not….

Armenia – This blows all that came before it out of the water. The conjunction of great backdrop, lighting, costumes and choreaography and vocals to gladden the heart means this is sailing through to the final no problem. Big audience reaction.

Andorra – bad draw for these coming after the break. Suzanne (the woman of many CD’) has changed her hair into a style that makes her look much older. The voclas are slightly better. I wouldn’t have worn the bat wings if I were her. Overall it looks more polished than previously. Falling into the maybe category at the moment.

Swizerland – As professional as you’d expect from an experienced band. Some of the vocals sound like they’re at a gig rather than on a TV show. He’s clearly playing to the audience. The mountain backdrop helps. He’s trying to get the audience involved. There’s nothing actually wrong with it. Good reaction from the crowd. I’m thinking that it’s going to get votes from the juries rather than televoters. And they just *might* save it.

Turkey – The biggest so far. It could be 2003 again. The choreography, lighting, costumes and audience reaction are all great. The pyros set it off well. Easily qualifying even without help from diaspora.

Israel – This suffers a bit coming after Turkey. It’s still pretty effective though. It’s really obvious that they’re both experienced performers. They aren’t the least bit phased by any of this. The vocals are great and the presentation is simple. It does everything it needs to and as such I’m seeing calling it as a yes for the final.

Bulgaria – were alway up against it anyway, but they’ve now been put after a break to add to their woes. The costumes are completely over the top and make them look ridiculous. They might just as well have brought te horse with them. The stilt walkers look plain silly but one them is missing tonight making it look even odder.. We already know about his vocals. They each get a solo vocal bit none of which match each other. Granny/Cher is particularly bad. This deader than a dead thing on Halloween. The audience are stunned.

Iceland – Sweden aren’t the only ones who have made a fashion faux pas but Johanna just about gets away with hers. The presentation suits the clouds and dolphins backdrop. Vocals spot on. This goes in the maybe category. Good crowd reaction.

FYRom – This has got quite a few guaranteed votes as we know from previous years. It’s quite appealing and well performed though. They play to the camera which puts them a step ahead of Switzerland. This one’s a definite maybe but the reaction in the hall isn’t massive.

Romania – This one looks messy. They’re trying to fudge together elements of several other Eurovision performances past into one. It makes it look dated. I’m thinking a no for this.

Finland – Another one that looks too busy. I can’t quite see the point of the fire eaters and lighted drums. The four of them standing at the front aren’t coodinated either in dress, movement or vocal. It’s pretty poor and I think they’re gonnas.

Portugal – Another break before this which won’t help. The stage backdrop is really sweet and perfectly matches our singer who is descked out in national dress. There’s a charming olde worlde feel to it which I think is going to go down very well. Performance spot on. I’m seeing this a definite. Very good reaction in the hall.

Malta – Her dress is far better than that dreadful red thing she wore in Kiev. The sparkly backdrop is really effective and really suits the song. The vocal performance is unspectacular. Whether it’s because when she tried to go for it in rehearsals she missed at the lot of the notes and decided better of it I’m not sure. I’m not convinced by it. Her reputation and fans might get her through, but it’s not a given at this stage.

Bosnia – cheers before this has even started. This could well do for Chiara. Performance and presentation perfect and very emotional. Big reaction in the hall. This is easily winning this semi.