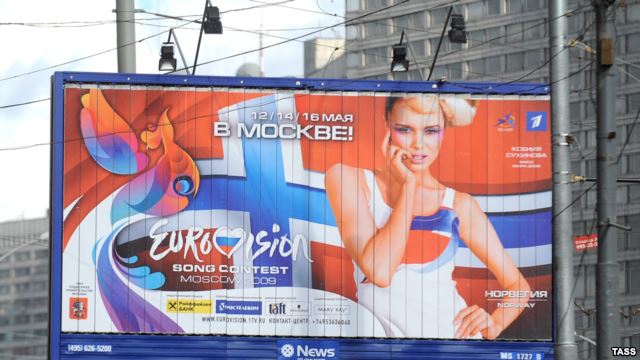 Now the opening of Euroclub is often a slightly underwhelming experience – a few bit of pineapple on sticks, and a hapless Israeli DJ playing ESC hits that nobody much cares about at the wrong speed. But this year we were treated to a far more expansive and eye-popping event. The venue for much of our festivities over the next week and a half if the massive Menege – an historic building nestling round the back of the Kremlin – has been Eurovisioned to within an inch of its life and now looks like a cross between a turbo version of the Top of the Pops studio and a disco on the moon.

Not too many attended from the kick off – a rather dry presentation from the organisers by all accounts – but it got going around half nine, when the stars started flowing in like treacle. Probably a good third of the acts were represented, including an uncharacteristically unaloof (or unshy, if you prefer) Chiara, random Bosnias, Belorussians, fluffy-haired Montenegrins, half an Israeli act, the frankly frightening Armenian sisters and a whole bunch more that my rapidly decaying brain has duly forgotten.

The party stars of the night award, however is split this time, with Gypsy.CZ and the Bulgars both consistently bumping and grinding until well after midnight. Oh, and the metal-haired Belarussian guitar mimer seems like a thoroughly good chap too!

Of the acts, we got a generous smattering of Russian ESC acts with slightly different hair from the past few years – mainly that little run of girl acts that we can just about remember, the stellar Mumiy Troll, a few near misses from recent Russian finals, and the delightful Ms Lorak put in a good stint too. By all accounts the billed Serebo and old twitchy Bilan put in an appearance, but the party was running down and the tokens running out by then so we’d taken our leave long before.

This bash in the multi-levelled fun dome was far more exciting and star-fuelled than even a few opening parties in my sorry years at this contest, so as a precursor to the Monday’s official opener, this bodes terribly well.

We shall keep you posted of all futher bun fights from here on in. We have no fun doing it of course – it’s a selfless act and it’s all for you!