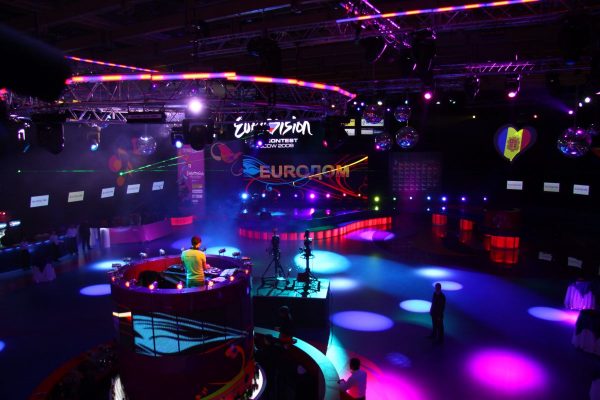 We’ve been left a little footweary after rather a hectic schedule of partying last evening. It all kicked off with a rather quaint little invite-only reception at the Icelandic embassy for their sweet, but ultimately doomed ballad. The sun dappled spots of sunlight through the trees onto the patio as we were treated to vodka and fish-based snacks made by the hand of the ambasador himself, no doubt. It was terribly sweet, but a little like a wedding reception for your Mum’s posh workmate, so we got drawn by the slightly more rock’n’roll allure of the Macedonian shindig.

Unfortunately they always decide to hold their bashes in obscure and inaccessible parts of town, and while they shipped folks in on special shuttle buses, they forgot to mention that they weren’t going to ship them back. So after a pretty smart do, dozens of disgruntled punters were left stranded and slightly peeved. Full marks then to party star and all round good guy Gipsy.CZ who crowbarred as many of the marooned revellers onto his bus as could comfortably fit on and ferried them back to the Turkish party at EuroDom. If anyone has embraced this whole event to the full it’s him and his mob, so we hope the fine fellow makes it through to next Saturday’s final.

The Turkish party was frankly odd. Scantily glad girls dished out nut-filled Turkish delight, while willowy models catwalked Thracian styles on stage. Flouro tambourines were also distrubuted among the throng, and the usual bunch of acts did a turn – Malta, Holland and Bulgaria among them. Belgium’s Elvis-alike also put in his first party stint, and spend the rest of the event looking moody in a rather sharp tuxedo.

Hot on the heels of this came the Bulgarian party in the same venue. By now almost devoid of any stars, bar the now-talking Israelis, and very little free stuff, it somehow managed to be a right old lark.

The big four – including our very own Jade – make their debuts today. But it’s also the massve 9th May celebrations in town, so getting about might be a bit of an issue. But I shall endeavour to keep you posted all the same.