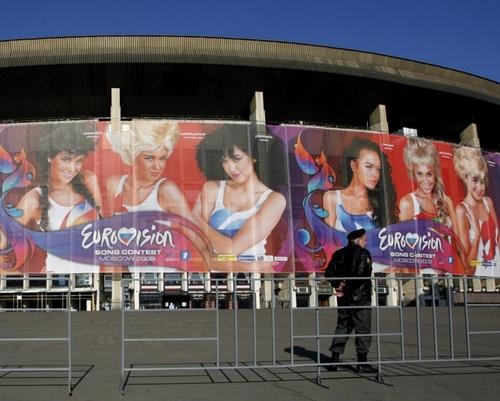 So what’s a boy to do if he’s hungry is this great big city? Well so far we have been to a place called My MY (pronounced moo moo) no less than three times. The cow theme runs throughout with a giant plastic cow outside and some poor lass made to wear a costume of similar tastelessness and walk the streets looking for the unaware to pose with. From our extended family, she only managed to hook Elaine. The food is cheap, filling and absolutely delicious with choices of kebabs, chicken, steak, sausages, pork snitzel and fish supplemented by fried potatoes with mushrooms and onions. There are salads galore for those watching their waistline (not likely in our group) as well as numerous soups served in a large cow coloured bowl. An array of cakes and flagons of beer at 2 quid a throw wash the whole thing down nicely for about 8 quid in total.

For the slightly more adventurous there’s a Georgian restaurant which probably has seen a drop off in business in recent months…. Again the staples are all there though served in several extremely interesting variations. We had chicken that looked like it had been on a severe diet (ie a small portion). Either that or they decided to execute the nipper before it’s parents. You can almost hear it pleading for it’s scrawny life, “don’t eat me, eat daddy”. Anyway there was about two mouthfulls of actual chicken on these bones. All served to us by a scowling waitress who clearly couldn’t wait to get rid of us. She was dressed in a red cloak and wouldn’t have looked out of place as one of the white slave traders from Thoroughly Modern Millie.

Last night I got to my four day itch I always get at Eurovision and craved a little of my own company so ventured off and found a kebab restaurant. I got what was listed as a starter (chicken knuckle) and turned out to be a second main course and a large drumstick coated in “espicery” which only proved that the colonel really did keep his recipe of eleven delicious herbs and spices a secret. For my official main course I had what was listed as a mutton and chicken kebab but was in reality a very long strip of amalgous meat though very tasty with it. Both dishes came with a small portion of rice, chips and a side salad (= one slice of cucumber and a sixth of a tomato).

Eleswhere in town a group of Russian Hari Krishnas serenaded me and an LGBT bear walked the streets (no not one of those hairy gentlemen) but another person in a furry costume adorned with a rainbow chest. And most bizarre of all a group of break dancers dancing to a rap of little known solo song by Frida from Abba, “I know There’s Something Going On“.

Later Roy and Mrs Roy dragged me to the opening of Euroclub to spend a few free beer tokens (of which we have many). It’s held in a vast aircraft hangar of a place this year a stone’s throw from Red Square. They’ve kitted it out with three floors of bars, a huge stage and almost as many lights and lasers as the actual Eurovision stage. They’ve clearly spent some serious money on it this year. To start with they put out vast quantities of red and white wine free to the assembled masses. It would have been rude not to have the odd glass or six before using my beer tokens. Many of this years stars joined us for the evening and we started the Franko with the stars scrapbook which is now a tradition where I pose with as many of the bemused contestants as possible. I nailed about a quarter of them last night including a rare chance to get up close and personal with Chiara dressed in her latest tarpaulin which I unfortunately stood on whilst being photographed with her. I also renewed my acquaintanceship with Krassimir from Bulgaria and met the Macedonian boys, Hadisse from Turkey (who is pleasant no matter anyone on here says), Azerbaijan, Armenia, Belarus, Ireland and the Czechs. Our Bosnian star was also present. He doesn’t smile much and is a serious fella.Some previous years stars also took to the stage and entertained us including Russia 2004, 2005 and later though we missed them Russia 2007 and 2008 (yes HE was there). Impromptu appearances also came from last year’s runner up Ani Lorak from Ukraine who’s still wearing that silver dress (must honk a bit by now). and possibly one of the biggest bands in the entire world, Mumiy Troll who presented Russia in 2001 coming a lowly 12th. They have however outsold just about every British and American artist that ever lived. Having seen them play in London a few years ago I can testify that they are far too good for this competition.