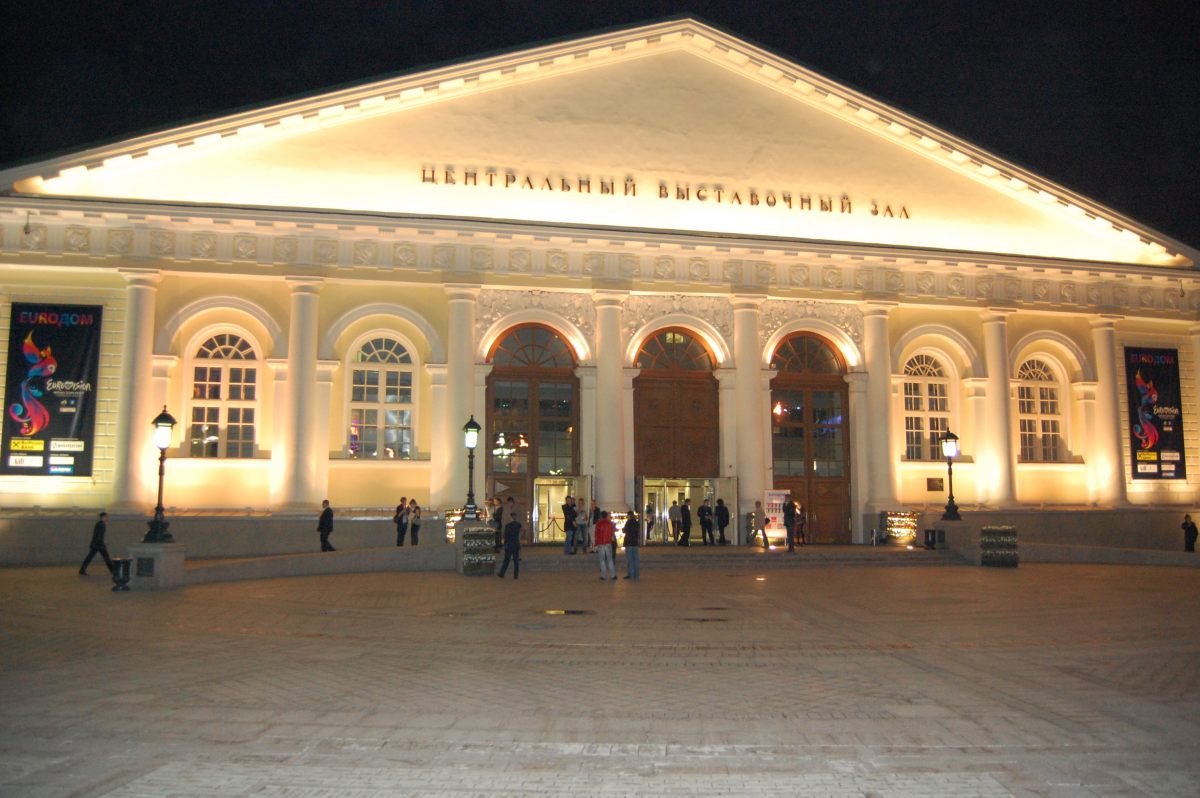 Last night was a right partying night. First invite only at the Icelandic embassy. Not much more than a couple of dozen people, but we the esteemed On Europe got through the gates for you. The street and the Ambassador’s house were very quaint and in the afternoon sunshine felt lovely. For a brief moment it felt like being in the west and you could have forgotten that you were in the largest country on earth and the strangest… Most of the guests turned out in their best party frocks whilst we did our best to lower the tone. A damn good buffet consisted of a chicken curry, battered prawns, smoke salmon, cabbage bread, potato wedges and a savoury cabbage with smoked sausage. This is a dish of beauty and reminds me why I like visiting the east so much. All the beer, wine and spirits are of course free 🙂 Johanna had a set planned, which looking at her stand consisted of her Euro song, Like A Prayer and some obscure Icelandic ditty. I decide I wouldn’t be missing much and head to Euroclub for th Turkish party.

The Turkish party was sponsored by Colin’s jeans from Turkey and they give out teeshirts and baseball caps. Since they open the party to selected locals they all rush to get the teeshirts whilst I manage to get one of the caps. There’s an obscure lottery for Turkish goody bags which takes place all throughout the evening. As we didn’t have numbers,we were ineligible so lose interest. Young girls hand out plates and plates of Turkish delight all evening into the small hours as well as Dum tek tek tambourines. Eventually we get offered Turkish delight so often that I end up eating some even though I don’t like it. Onto the music and Hadise did her hit and a couple of other songs which she clearly preferred. There are star spots from De Toppers (which makes me want to throw things at the stage), Belgian (ditto) and Belarus. Even more disturbing they play some internet karoake performances of Dum tek tek and then hold a fashion show! Roy and Catherine having gone a wild goose chase trying to find the Macedonian party then turn up desperate for a beer (all free again). Roy doesn’t drink… When we thought the Turkish proceedings are over, Hadise came back on again and did Dum Tek Tek again… she makes comments along the lines of “vote for the best performance not the country… it doesn’t matter who wins. All the singers are my friends” Nobody believes her, they know she’d give eye teeth to win this.

A small gap in proceedings when a really strange karoake gets set up on the second floor. After there have been five Abba songs in a row chosen, it becomes obvious even to our dull hostess that it isn’t working.

Then at 11pm the Bulgarian party started. Each member of the group did a solo performance. Granny/Cher’s performance is particularly bad. We are treated to Illusion 3 times and after several beers I’m starting to like it 🙂 Repeat performances come from Belarus with surprise appearances from Andorra and Israel. I’m quite a big fan of Noa’s so I’m pleased she’s turned into a party girl.

I know not exactly what time the Bulgarian party finished (see earlier comment about beer) but the whole proceedings turn to farce with the arrival of Pedro as with every year. I like Pedro with his conspiracy theories and ideas of who is going to win. In the many years I’ve known him, he’s never predicted correctly. This year he’s convinced it’s between Malta and the UK so they are clearly both doomed 🙂 Some random individuals appear to know me even though I have no idea who they are. I appear to have acquired a fan club. None of them are Moldovan I’ll wager or Dutch.

On to today. It’s VE Day and the tanks and planes are out in full force. It’s also the day when France, Russia, Germany, UK and Spain rehearse for the first time. It’s also the evening of the Ukrainian party which is always a surreal affair with a cast of thousands. Vladimir Putin has just turned up at the Press Centre to inspect the facilities. He’s now requisitioned the rehearsal hall and barred anyone else from going in. He’s a small man but he has some very big bodyguards. A gaggle of Greeks are frantic since their going to miss their hero’s rehearsal and have to watch it on screen. Their hysterical appeals have no effect on the Eunich like Russian security guards standing at the entrance to the hall. This incident alone makes the day worthwhile. It’s clearly going to be a bizarre day :-)))))))