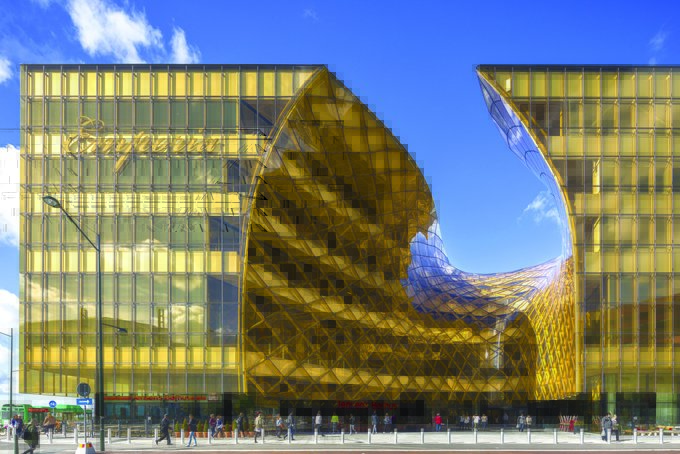 Well if you’d asked me last year as we sat in the glorious setting of Baku’s Crystal Hall on a peninsular in the Caspian Sea where I would be in the hours before this year’s Eurovision final I’d never have said on the roof of a shopping centre in the middle of a building site on the outskirts of Malmö. But that’s where I just was, on the rater grandly over-titled roof terrace of the Emporia Mall, just next to the arena. Admittedly the view over the Øresund Bridge (I’m using the Danish spelling there just to fox you and to show off a little with my international keyboard) was good but really this hall from the outside is not quite in the same league as Baku. But let that not detract from the fact it’s been a quite stunning week here in Sweden and an absolute treat for someone like me who just loves everything this crazy Contest has to offer.

We’ve spent the day taking in the atmosphere around the city. It’s electric. Eurovision Day is always full of anticipation but there’s something about this that feels in a different league. Maybe it’s because the Swedes as a nation love this show like few others, or maybe it’s because there’s some fans who are here for their first ever Contest and so many returning  who chose to sit out the long journey to Azerbaijan last year, but it really is so energising. And we’ll need to feed off that for the three hours of standing that lie ahead. Ooh, my bunions!

If you’re reading this you’re likely to know the songs already, so there’s really little to add. If you’re a casual viewer or a friend that’s clicked through to read my thoughts and don’t yet know them then I hope you find plenty to enjoy as you share my little obsession with me. I’m making myself a bit emotional now writing this so rather than blow the fuse on my iPad with a tear of joy slipping down my cheek I’ll just hand over to the broadcasters as we head off to soak in yet more of the build up.

Fab Eurovision to you all.

Oh what’s that? You want me to pick a winner? Give over! I haven’t got a clue. Ok then: United Kingdom – there, I said it! 🙂