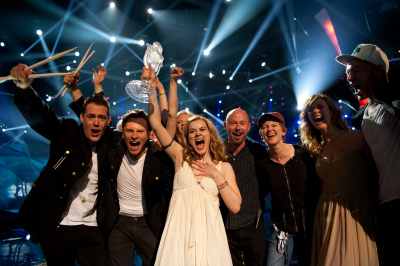 Before it gets too late I’ll just sum up the season. What a fantastisk time I had in Malmö! It was a great experience, fun, hassle free, and ultimately not nearly as expensive as I’d feared. Thanks to all the production staff, volunteers, organisers of fan events and friends and colleagues who were there and helped to make it a great Eurovision.

So what of the result? Well, it’s difficult to be surprised when the favourite wins, isn’t it? Denmark was slick, catchy and instantly impressive. Azerbaijan as runner up equally so, with Farid’s vocal immensely improved from the national final (they really are good at this, aren’t they?). I was happy though he didn’t have to reprise it as a winner to a needlessly hostile hall, some of whom booed at some of their bigger scores. Zlata’s giant didn’t harm her presentation after all, and Norway did deservedly well, but thankfully didn’t have us negotiating higher limits on our credit cards for next May.
Quality seems to have been rewarded with Netherlands and Hungary doing very well. Poor vocals and unoriginality seems to have been punished (yes, I’m looking at you Cascada). The UK and most others finished in understandable places. The only genuine surprise was Ireland’s very poor showing, which I really can’t fathom at all. Though 26 songs is a lot to sit through and compete against.
A minority of voices have shouted loudly about the Swedish presentation, but in discussions with work colleagues and other casual viewers it’s been overwhelmingly well-received with people loving Petra Mede and the whole tone of the show. There’s been a certain lack of humour at some of the more risqué jokes in some camps, but having spoken to some of the delegations after the show there were some even stronger moments cut out from the video segments (one originally contained a ‘fuck’ that the BBC certainly couldn’t have broadcast, and I’ve heard they censored Eric Saade calling Petra a MILF). If there’s any quibble it’s the fact that the show overran, something you wouldn’t really have expected of SVT, but the voting segment remains notoriously tricky to keep to schedule. Oh, and all those flags in shot! This happens every year, why don’t they ever seem to expect it?
The big news for me is that my mother not only watched it all the way through but that she also enjoyed it! Denmark and Italy were her faves, by the way. This is clearly the most accurate barometer that attitudes to the Contest are finally changing for the better in the United Kingdom.
So, one more blog post to come from me to sum up some of the extraordinary number of allegations of voting impropriety that have resulted from this year’s show, but other than that it’s all over for another year. Thanks for choosing to read On Europe, and for your messages and hello to those we met in Malmö. Your support is hugely appreciated. And can I just get in their early with a happy Eurovision 2014? It’s still not as early as those cheeky Danes who had a congratulations message on the side of a truck parked outside of the arena as we left, with the message that they’d see us 14km to the west next May. Saucy!
Monty x

Thanks Ash, much appreciated! Would be great to see you there!

And thanks other anonymous too. You know there were plenty of straight women who didn’t think that Irish display was homoerotic in the slightest! And having met the dancers neither seemed to be gay. But yes, poor Ryan, I didn’t see that coming at all.

Clearly a very discerning viewer, your Mother, because we too thought that Italy was fabulous. Agree with Nick that singer should have used cameras more effectively but I doubt, even then, that he’d have challenged the mighty Danes (who almost turned smugness into a new art form). It seemed to me strange that the UK didn’t give Italy a single point (uh oh, televoting scandal No 157). And what about poor old Ryan? I have a theory – probably misguided, they usually are – that maybe Sheila Martin & Co overdid the homoeroticism? It was already quite a camp song and perhaps the bare-chested drummer boys tipped it over the edge?

One thing’s for sure, as an ordinary TV viewer, this year’s show was one of the best ever. Loved the humour from the Swedish presenter and it was slick, but fun, throughout.

One last point about Bonnie Tyler. Watch her performance on iPlayer and you’ll be shocked at how many times she sings out of tune. On several occasions it’s the backing singers who rescue the song. 19th in the final seems about right to me.

Thanks to all for the energy spent in updating this blog. I have enjoyed reading it. One day I will be there.