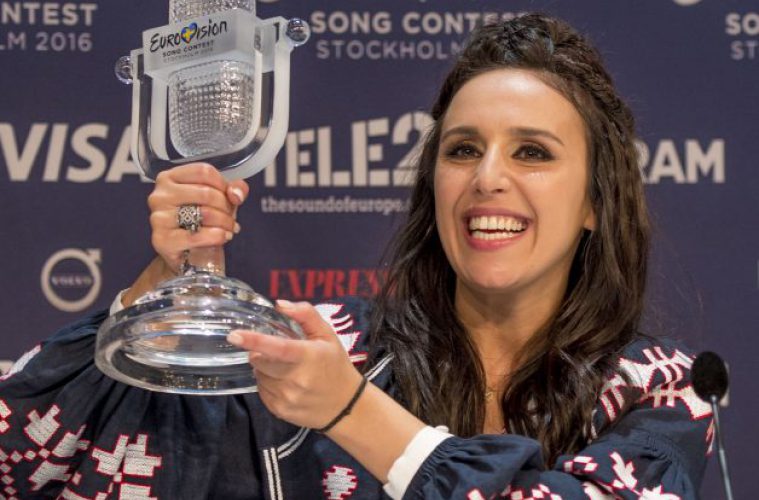 So, to wrap this up, the top five – deconstructed …

One of the pre-contest favourites, Frans only just scraped into the top five at the end of the day. A decent home town result for SVT who, despite the budget, would not have wanted to host the contest again so soon.

The song, however, never had winner written over it in retrospect. The fact that Frans was known for one song, and then this one, meant that his apology set to music was artificially inflated as a favourite. In actuality what you saw on stage was a teenager mumbling in a mockney accent. It appealed to teenagers who doubtless thought Frans “cute” and voters who thought “ahh Sweden, can do no wrong” and even to some jurors  (mainly in the locale) who had a bit of a sympathetic ear.

This is what happens when a country that has been frankly awful at the contest decides to sit up and take notice.

Bulgaria’s previous record – NQ NQ 5 NQ NQ NQ NQ NQ NQ (2 years out) – wasn’t exactly stellar and it’s not surprising that they took two years out to do “something”… And what a “something” it was. A woman in a lighty-up dress singing a very good pop song, dancing like she has rickets (awkward).

Unlike some in this contest, Poli and her team had decided early on to ensure they stood out by getting a good song and then fitting the choreography around it, as opposed to polishing a bad song with choreography; and to this end, they were successful. Not a note wrong all fortnight and when it came to the final reckoning, it didn’t come as much as a surprise that Poli won over the televoters, especially in Cyprus and Spain where they scored the maximum twelve points.

I suspect that on the jury side they were marked down because they were before many of the big hitters, which prevented Poli from gaining the marks that this well-polished and written song deserved. No twelves and five tens seems a bit on the stingy side.

Oh my god where on earth do I start!!

Bookies favourite, apparently (though it helps when the Mafia are shortening the odds), Russia flattered to deceive in the most deliciously painful fashion at the very end of the scoring in a coup d’etat that the EBU would be proud of!

This was a slow death in two parts. The first one was on Friday night where I saw and wrote this:

“Identikit song from Russia on next; the kitchen sink has been thrown at this in an attempt to win the contest on the lowest common denominator. He looks pained while he is singing this and there is a whiff of desperation. There is no way this should be an even money favourite. (…) Televoters will lap this up.”

I placed it fifth.

And, almost to a letter that came to pass. Just 130 points from the juries and Russia’s chums didn’t even come to its rescue. Azerbaijan and Belarus gave it 12, along with Greece and Cyprus (mindful perhaps of the Russian influx of cash to their economies). Eight came from Montenegro and sevens from Albania, Latvia and Moldova. Its eight neighbouring countries gave it a grand total of 40 votes out of a possible 96.

Televoters, however, went f*cking wild for a song that they think can and should still win the Eurovision. Sergey scored 88 out of those 96 possible neighbour televoting points. Along with points from right across Europe, showing the doubters that the public still need to be heard when they decide to shout. And they shouted very loudly. 361 points meant a comfortable win for Russia.

The second part of their slow death was to come, though. It was exquisite for the viewing public to work out if the battering from juries mixed with popular love would be enough. In the end, it wasn’t. It wasn’t even enough for second place. Sergey was pushed into third and Comrade Kirkorov could not hide his frustration at their defeat.

Coups are usually staged in private, with a public face from the protagonists. This one was the opposite. The smokey roomed conspirators secretly dealt the Russians a blow they could not get away from – or at least that’s what certain people would have you believe. Had Eurovision “allowed” the contest to go back to Russia, there would have been all sorts of trouble. The contest, as an entity, chose not to. I believe that, as I wrote on the Friday, Desperation + Public = not a winner.

Again, another easy explanation. It didn’t win!! – Seriously though, after its Semi-Final performance (both the actual performance and the fact that afterwards we heard that Australia scored from all televoters AND all juries), the price plummeted with bookmakers.

Dami did the first part right, she connected with everyone, conveying the ‘vote for me’ message, in a classy, non-shouty way.

When the final came round, the juries saw that class and heard a well-written, modern song. This translated into points … lots of them. Televoters, however, remained convinced that Russia was the way to go, leaving residual votes for Australia. As such Dami Im’s popular vote trailed in a disappointing fourth place. When the numbers were added up, Australia ended second.

In retrospect , I’m not sure I know where Australia could have got votes from but it leaves me unsatisfied in many ways.

So who is the winner of Eurovision? – well Ukraine and their anti-Russian followers (if you read the madder parts of the interwebs). The facts are, as always, simple.

On Friday night, Jamala went “large” (as we say). It was powerful and emotional, and she cried, and the press centre roared. This was the version that the juries saw and they voted in their droves. 211 points in total, with eleven nations awarding the maximum twelve – though none of those twelves came from Ukraine’s nearest neighbours. At the same time, nine suggested points from countries seemingly allied with sympathy.

When the televoters saw it on the Saturday, only six 12-point scores came their way. This is most likely because Russia had stolen the show. However, twelve lots of ten and only seven countries awarding 1944 less than five, meant broad support.  The majority of European  televoters (on this system) thought it top ten material.

And that’s what counts. Ukraine had the edge.

It’s all about the tie break