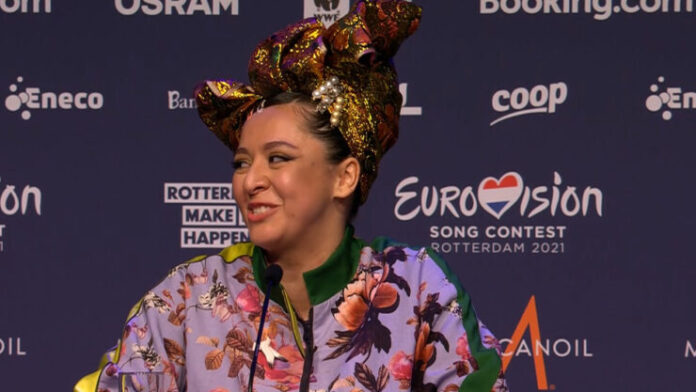 Manizha is in Rotterdam to represent Russia at the 2021 Eurovision Song Contest with ‘Russian Woman’, a song she wrote alongside Ori Avni and Ori Kaplan. With rehearsals underway, we caught up with her during a press conference.

Before we could talk about Eurovision, she wanted to offer a heartfelt message of support to the victims of a school shooting in the Russian city of Kazan after seven children and two adults died. “We lost a lot of young lives and I cannot find the right words.” Visibly emotional, she offered the support of her team. “We’re all supporting you. To those watching, I say don’t be afraid to ask for help with your problems. Find a friend and talk. All your problems matter and you matter to the world.”

She thanked the Russian state broadcaster for backing her song. Her messages of ‘breaking the wall’ and ‘rising up’ are aimed not just at Russian women. “Like a matryoshka nesting doll when you open one up, you see another. My song is for all the women on our planet. We need to be braver and happier, and I’m happy to inspire them from the stage. Eurovision is one of the hugest stages in the world, so of course my dream is to say something important. I believe that through art we can change the world.”

When asked how she deals with people who wanted to see Little Big on the 2021 stage, she was emphatic. “I don’t want to rise to talk to haters, because what’s the point?” When pushed by another reporter, she added, “Everyone has good sides and bad sides. If you want to change, you need to get to know your dark side and accept it’s not right to hurt anyone.”

Eurovision lets people be themselves

“Eurovision is about humanity and with an open stage, you can send any message you want. As a feminist, Eurovision gives you the chance to send your message. People who go to the contest can be themselves, and that’s hard to do in the music industry.”

When asked about who she sees as an inspiration, she named Thom Yorke, Nina Simone, Yasmine Hamdan. “Everyone who does their job from within and who is honest with their audience.”