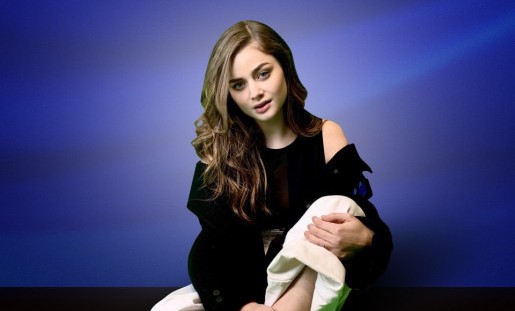 Should everything go tits-up with travel plans the half-Dutch Greek singer Stefania might be one of the few performers able to step foot on the actual Eurovision stage as it’s only a short schlep down to Rotterdam from her home in Utrecht. She has already represented her country of residence on a Eurovision stage, as part of the Dutch group in the Junior version in 2016.

Stefania likes a bit of magical realism. Last year her video for Supergirl saw her possess all manner of paranormal powers and this time she’s summoning up a flood as she waits at a red light before taking a leap of faith into the ravaging waters only to be saved by the convenient passing of a winged Pegasus at just the opportune moment. She’s whisked off to an alternate land where a muscled walloper, naked save for a pair of Zara beige slacks, stands holding what appears to be a giant Alexa speaker. If this has all been activated by Stefania’s voice it’s quite the trick. Before you know if she’s back at her red light, just as it turns green, ready for her to cross an already empty road.

Along the journey there’s a song, and whilst it’s another to ride the crest of 80s revival, it speaks volumes that while I’ve been watching all this nonsense go on I couldn’t for the life of me hum it for you. This could be a fatal flaw in Stefania’s Eurovision hopes. I mean, I think I quite enjoyed it, but in Eurovision terms that’s pretty damning.

Will it qualify? Will anybody remember it either way?

Greece – Should have been last on but…

Daughter of Europe you say? – The Greeks might not think so