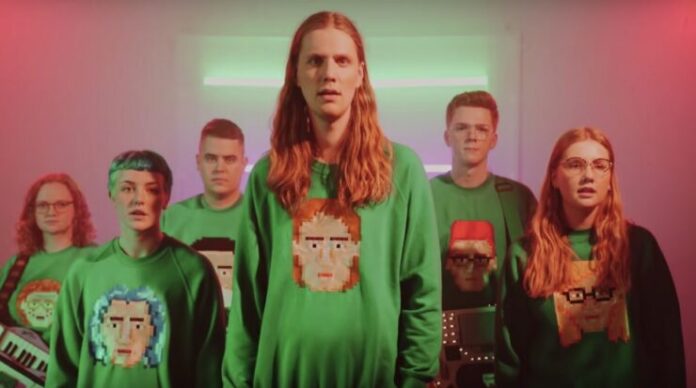 This could adequately be described in six words: “Not as good as last year’s”, and fans would probably understand and go “yup”. But, as it’s my website and I’ve got to pad this out with actual words and stuff here we go. Dadi has decided, again, to sing a song about a part of his life. Last year it was his baby girl, and this year it’s his marriage – hence the title ‘Ten years’.

Which is precisely the length of time I believe passes between note one and the final note because, as mentioned in the opening, this song is nowhere near as good or as instant as last year’s entry. Last year this:

Had lots of people who don’t know or care much about Eurovision asking me the question, “What’s this Icelandic song all about then Phil?” and I’d have to explain why this was nearing the top of the charts, basically because it had a great vibe and kooky and 70’s … but not a deliberate pastiche.

Fast forward 12 months, and no one has asked me about “10 years”, because the surprise factor has gone. It’s almost, and don’t say this too loudly, that all of Dadi’s efforts went into his one shot at international stardom. Now he has a second bite of the cherry, he knows he can’t put the same song in, but is lumbered with the niche he carved for himself. He’s tried to repeat the successful elements of last year  in the subject matter and style of the song, but it just seems a little … flat, for my liking. I guess, it’s the NickD and Belgium thing – I totally get and respect the song, I just don’t like it as much as last year’s – and that’s ok. It’s still a good tune and all, it’s just lost some sparkle.

Last year’s Icelandic song had a wide appeal. Even people who are not interested in Eurovision, could relate to the song. Comes 2021 and this song just isn’t working. It miss everything which made “Think About Things” so successful and endearing.