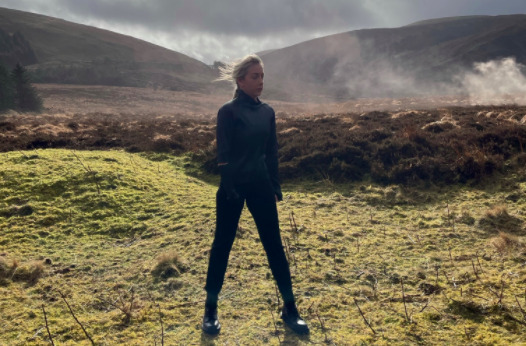 When my late mother was still with us, and I’d been naughty at school, she’d often say (amongst other things) that she’d wrapped my sandwiches in a map. But I still came back.  The feelings of being unloved still haunt me. However, thankfully i stopped getting the shakes about the age of 30 … but the title of this song brought the memories back to the surface.

It’s unclear which series of Ordnance Survey maps Lesley is singing about, but I’d like to think its the Explorer series. But enough of my map-related knowledge and anecdotes.

‘Maps’ (the song) is a metric tonne better than her effort of last year which, in the opinion of this writer, needed to be less “I’m gay” and more “I’m singing a song”. And make no mistake this is a song. It shares the same driving back-beat that ‘Story of my life‘ had, but as Nick has said, Mr Olafsson in Trondheim isn’t going to care how it got here, just that it’s here.

It’s typically Eurovision, if such a thing exists, the structure of the song is instantly recognisable. I just hope Lesley can sound less twee and more beefy to match that strong back-beat, because the preview video leaves me feeling she’s fighting to be heard  … or that they forgot to turn her mic up in post production.

It’s not a winner, lets not get carried away here, but with a good performance this could well qualify to the final for Ireland, as it ticks all the right boxes. It’s familiar, it’s easy, it’s “Eurovision” – it’s also just a touch on the light side, which could be it’s ultimate downfall.