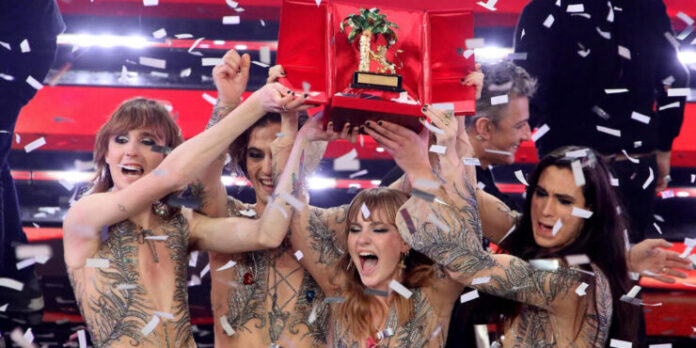 This should not be my thing at all – for starters I was of the opinion that Italy should never ever grace the contest again if all they could put in was the same old ballad rehashed a million times and when they left in 1993 right up until they came back, that’s what I thought.   Then the powers that be at RAI decided to actually listen and coupled with SanRemo actually being a bonafide national final the standard of Italian entries upon their comeback started high and kept rising.   I don’t like rock particularly either, I mean the closest I get to a mosh pit is a discreet 200 miles or so and the heaviest thing in my MP3 collection is the hard drive that they are all hosted on.

And yet, after about 20 attoseconds when the riff kicks in, which is as instant as the one from We Will Rock You  or I love Rock and Roll, I’m hooked and I can’t tear myself from the video.  Beneath the layers of make up and black eye liner hides a song that is equally complex and face smackingly direct especially with the lyric in English being something that I have latched onto because they mean a lot to me.  It is the epitome of a song that grabs you and says “ Go on, don’t vote for me, I dare you” and you can’t.

This isn’t like Finland, this is real grown up rock that is not playing to anyone other than people who like the song and if you don’t, I suspect Maneskin wouldn’t mind or care.  This is three minutes of pure genius.  Not in a schlager Buck’s fizz kinda way, cos that’s genius too in its own way, but this is one of those rare things, a real song, of it’s time, in a real live song contest.  The Juries should see the chart potential of this and vote it up – Televoters should vote for it because it’s just a good piece of music.  Will it win? – I suspect it’ll come close.  Does it deserve to win? – Yes.

Italy – Rehearsals are for rehearsing

I acknowledge that it’s a good song but what stop me from really enjoying ti or connecting to it is that this a rock song, a genre I have never could connect with

Amadeus will continue to conduct the Sanremo Music Festival, which regularly doubles as the Italian national selection for Eurovision, until 2024, after hosting the 2020, 2021 and 2022 editions.

The dates for Sanremo have been released with the winner decided on 11 February 2023.

An official confirmation of participation from Italian broadcaster RAI is pending.