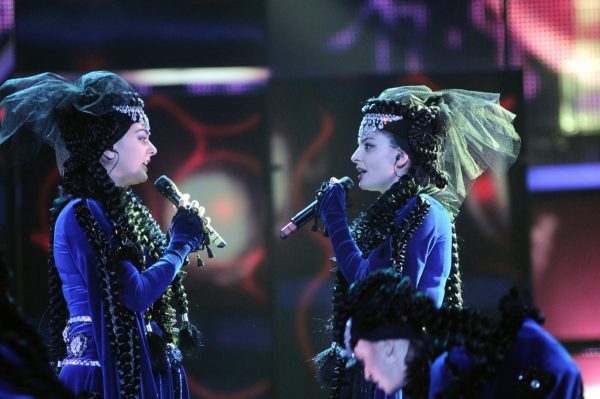 Phil: Finally, something that I like! This has lots of potential to good things in the contest. They have changed the lyric so that it is in Armenian and English, which I think works very very well – they have just completed their first run through without the steady-cams which bodes well for excitement!!

And so we sat and waited for them to jump around the stage with the steady-cams and were we disappointed? – Well a little really. The dancers did the movement as the singers stood on a big suede plinth and i suspect they are the first group that actually *are* holding back – There is more from this lot to come I hope!! – Vocally spot on (unlike Sweden) this, as I have said, has lots of Potential.

Franko: Well it had to happen eventually. Someone actually appearing professional and likely to qualify. It only took six songs!

This is slick as with all Armenian entries. Choreography galore, vocals spot on. Come the live show, this is going to cheer the whole thing up no end. I’d only heard this twice before. The first time terribly drunk when I liked it, the second sober when I didn’t. I’m erring very much more towards the first having seen it performed now. It won’t be just diaspora that gets this through to the final. They’re not bothering with stage costumes yet preferring the Tatu school of rehearsing and staying minimalist. They stay on a hairy plinth whilst their backing dancers do the hard part and they concentrate on the vocals. Something that some other singers in this contest would have been wiser doing. There’s even a key change in the best tradition of the Euro 🙂

It’s not a winner by any means but it has qualifier written all over it.

Armenia: Up there with the best

And finally… Armenia (said no one ever) … time to snap