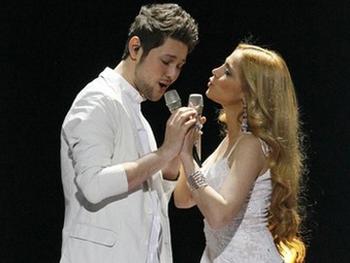 When Ell and Nikki won the Eurovision Song Contest for Azerbaijan last May there were immediate loud cries of “foul” ringing out through the concourses of the Esprit Arena. There had been accusations of dodgy dealings and backhanders from this Caucasian nation for as long as they’d been in the contest, and their win, coming as it did with such an unspectacular tune, seemed to underline this fear – particularly as their song took a unexpected charge up the betting in the last few hours before the contest finally began.

Somebody had surely got wind of the story that the contest had been fixed in their favour and whacked a massive bet on?

It’s a popular view, but one that can be proved almost certainly untrue if you cast a statistical eye over last year’s results. For it appears that rather than taking the Eurovision crown by any grave conspiracy, Azerbaijan actually won the 2011 contest by complete accident. And here’s how…

The scoring was incredibly and quite unpredictably spread out. A record 20 countries gained at least one set of the maximum twelve points – with only Estonia, Russia, Switzerland, Serbia and rather surprisingly the home nation Germany missing out.

As statistics go, that lot do appear pretty conclusive.

But while it is indeed true that the scoring at Eurovision has become far more susceptible to nobbling since the reintroduction of the juries, the televoting is still a vast and complex beast, and it would be a massive undertaking to co-ordinate that kind of continent-wide scam. Close inspection of the freakishly spread out points allocation last year suggests that this most probably didn’t happen in any successful way.

Aside from all these facts and figures, you must also take into consideration the fact that traditional vote sponges (and allies to Azerbaijan) Russia and Turkey had sent uncharacteristically weak songs. The points they didn’t get had to go somewhere, and Azerbaijan was a likely first port of call.

Also remember that despite not really liking at the time, you’ve been singing Running Scared in your head at least once a week since last May – so it must surely have been a better song than you first gave it credit for. Add these factors to the huge body of statistical evidence I’ve outlined above and you’ll have to agree, however churlishly, that it can’t have won by anything other than fair means.

After all, looking at those scores in detail it’s evidently clear that anyone who actually tried to fix last year’s contest, from whatever nation, must have been really, really shit at it.

When I used to live in a Hungarian dormitory back in 2008, the Azeri students went to a separate room when the time was there to vote: one of them was my friend and told me their Embassy in the country had delivered lots of SIM cards full of money to vote for them. Not surprisingly they received 12 from a single country – Hungary!

Their system should have become better and better by 2011. Apart from this, Turkey wasn’t there in the final, which automatically gave all the Turkish national points to Azerbaijan.

However, I don’t have anything against their song for 2011. They usually come up with good songs.

It was quite surprising that Azerbaijan won last year. A generic, dull ballad, the singers didn’t sing well and they weren’t special. The draw definitely helped them + competitors for the first place like Sweden performed earlier. I can’t understand what happened but i’ve started to believe those conspiracy rumours. Azerbaijan is not a poor country, they have spent millions of dollars for their Eurovision entries and for the building of a new arena.

I’ll also point out to you that Azerbaijan won the Glasgow preview contest last year featuring yours truly plus two Scottish boys and their mate. So it didn’t really surprise me apart from the weak staging of it.

The Azerbaijan win wasn’t that surprising. Pretty song, good hook, decent performance. The shocker for me was 2008. Not least because some bookies made Russia the hot favourite before the song or singer had been declared. And then we got Dima Bilan and his camp skating partner. Boring song, bizarre performance.

Could this possibly have been (let’s whisper it) a ‘fix’?

I’ll pedantically pull you up on using the term “juries” to mean “the entities which create the final allocation of points awarded by each participating country – and by country, I mean independent state recognised by the United Nations (plus occasionally the Principality of Monaco)”, though I can understand why you did so.

Clearly Italy tried to fix last year’s contest but nobody told them they have televoting these days. #onlypossibleexplanation