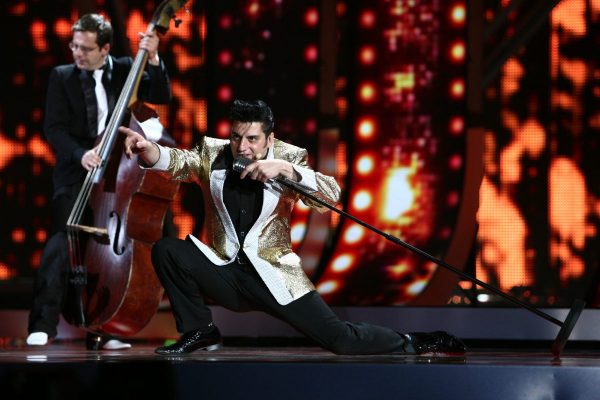 Franko: Yes it’s bad Elvis impersonator time along with hideous song. The staging is the most striking so far in that they bothered to use the vastness of the arena to their benefit. Doesn’t detract from a completely forgettable song though, sung badly….Oh dear Belgium really don’t get this contest any more. Some people like rockabilly (I loathe it) but even if you do you’ll be hard pushed to back this. There aren’t words to describe how bland it is. I couldn’t hear a word he sang and that’s seeing it in the hall and on the screen in the press centre. He looks like a sweaty spotty pub singer. He needs to go easy on the hair grease. At least no one will ever invade them again if there’s the slightest danger of being subjected to music like this. Mr Colclough is singing it’s praises but he was about due one of his turns anyway so that probably explains away that. Bottom five guaranteed.

Phil: Ah … Belgium – Land of Chocolate and Elvis … Oh How I love thee. Well more specifically how I love this song. Now there are people that follow OnEurope and who will say that its a pile of old poop and not to bother with it – not a bit of it. But, hey … It’s an Elvis impersonator, whats not to like?

It looks brilliant on the huge stage in Olympiski and, as such with him being a wee man, he is going to be swallowed up by it but hell – it’s a laugh a second song with a very good staging. It is, however, 350/1 for a reason – it’s not very good at all – but it makes me smile!!