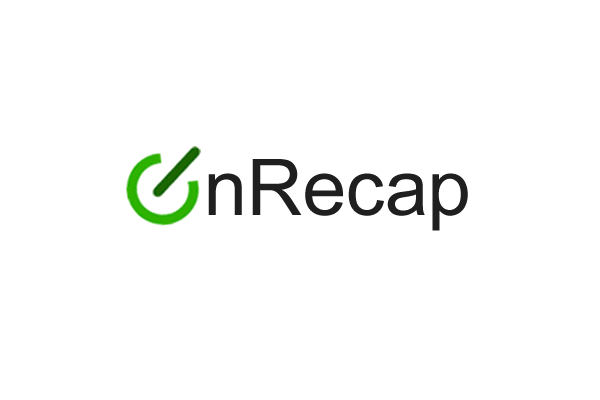 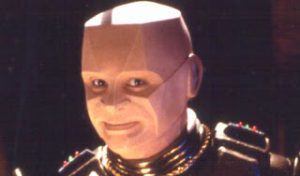 Well since yesterday The Celestial Toymaker has had to withdraw from the panel due to doctor’s advice. In fact two doctor’s advice, the ones that signed his committal papers whilst the orderlies held him down and attached the straight jacket. He did however ask me to pass on his thanks and told me that his new accommodation is very comfortable. Nice and warm and padded. Apparently they were a little concerned about him when he visited Sainsbury’s dairy counter. They didn’t like the way that he was flexing the cheese wire…

So in his place and at short notice, we have Kryten from the crew of Red Dwarf.

Franko: How are you Kryten and thank you for filling in at short notice.
Kryten: My pleasure Mr Franko sir.
Franko: shall we get on with Switzerland? 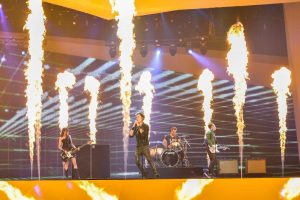 And what have we here? Not a proper song surely? You see Switzerland do this and then nobody cares. But then it’s Switzerland and nobody likes those old Nazi gold hiders so what does it matter if they fail? And that I fear is the problem with this and why it will fail….

Poirot: It is not elegant non…
Kryten: I’m sure I could beat my spare head into shape to this tune.

Verdict: hope there’s a direct flight back to Zurich on Wednesday… 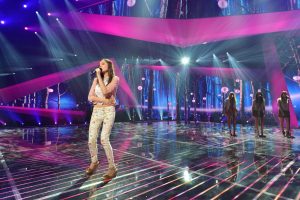 And so to Monsieur Poirot’s homeland. The country of thieves and beggars and criminal types. In fact why did you leave Monsieur Poirot? Surely it would have created more work for you?
Monsieur Poirot, stop that lecherous grin this is a family show.

Poirot: Regrettably I was forced to leave Belgium because I was placed in charge of an orphanage and the authorities they were not happy with some of the activities I introduced for entertainment…..
Franko: The song is pretty forgettable but I could just see that people are so fed up waiting for a good one by this point in the draw that they’ll either have left for a cuppa or vote for it so that they’ve got something to do.
Poirot: Naturally I support my fellow countryman or countrywoman. Did I tell you I like wearing women’s clothes?
Franko: I don’t think we want to hear about that.
Kryten: Well I like it Mr Franko sir. It reminds me of many days spent folding and ironing. You just can’t make days that good any more. Hmm mmm.

Verdict: in the final by the hairs on Tin Tin’s head. 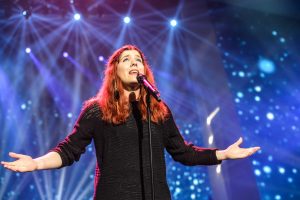 Most years Finland enter something trite and qualify. But about every third year they enter something really interesting and nobody but me likes it. Such is the case this year. Her ensemble isn’t great. She seems to have tucked the tablecloth from her local roll mopp restaurant into her skirt and walked off from the table without untucking it. Green is not a becoming colour for a red head, a fact that Finland ought to have realised after 1996. I love the song but it sounds like an album track from a Goldfrapp album.

Poirot: What devilish language is this? I have visited Finland and I remember it not.
Franko: It’s Swedish Monsieur Poirot. Kryten? Kryten? What’s happened to your face, it appears to have frozen in a permanent yawn.

Verdict: It’s not just the singer that has an identity crisis…. possibly last… 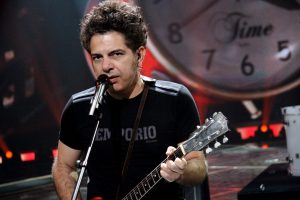 Israel are always either shit or pure genius. We got the shit last year and we have the genius this year. I love this. They don’t need to do much with it, he background provides the Salvador Dali-esqueness you’d expect. They’re just a band doing their stuff. Unfortunately when Israel enter such a song, they rarely do well, which is a real shame because it’s a head and shoulders the best thing we’ve had so far.

Poirot: I once travelled extensively in Palestine and there were lots of murders.
Franko: Monsieur Poirot, it hasn’t actually been officially recognised as part Palestinian. Please keep away from politics or we’ll get death threats…
Kryten: Oh that’s much better Mr Franko sir. My jaw has completely unfrozen. I thought I’d have to beat it with a lump hammer.

Verdict: not quite, but it’s a shame. 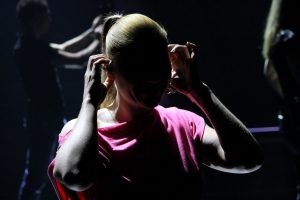 What could be worse than a song written by Siegal about Facebook sung by a girl pretending to be 20 years younger than she actually is? The answer is : NOTHING. This child was made from the devil’s own sperm. Why he can’t just retire like other past it songwriters is beyond me. I realise there aren’t many people in San Marino, but there must have been someone surely? If not import someone from their Italian neighbour where music is plentiful and good as the wine and pasta.

Poirot: I don’t use Facebook or Twitter. I am famous enough. I am afterall the most famous Belgian ever and the most greatest detective that ever lived.
Kryten: I have a facebook page. All my spare heads and arms are friends on it. There aren’t many other friends apart from the Poloymorph who seems to like me… oh and Holly of course. Mr Rimmer just posts comments about the fact that I don’t have any reproductive organs…

Verdict: Back into the pit of hell oh demon… 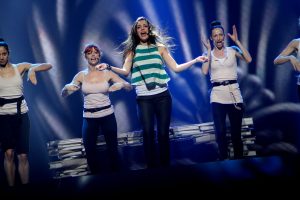 From one really crappy song to another. And this one is out of tune too. She appears to have nicked someone’s fireplace to stand on and it plods away in predictable Greek Cypriot fashion with less clue where it’s going than a blind guide dog.

Poirot: Eet is not for me. Mon ami Hastings I think may like her. He likes very much the brunette.
Kryten: My Hoover sings better than her.

Verdict: surely not if their song last year didn’t get through… 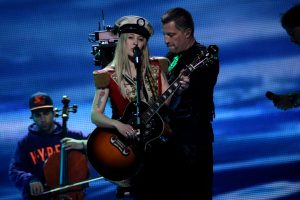 Well a fairly accurate reproduction of what she did in her national final, complete with unflattering militaristic costume. Amongst all the dross and the weirdos, it’s a safe bet much like all the songs coming from Denmark.

Poirot: The Belgian police force used to make us wear something just like that.
Kryten: Much more my taste Mr Franko sir

Verdict: surefire finalist. Won’t win though as people will be bored of it by then. In fact I’m bored now… 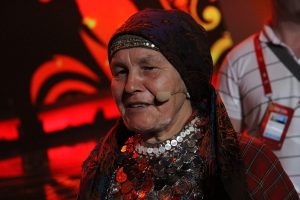 Well what a welcome breath of fresh air this actually turns out to be. I only see people like this when I visit my aunt’s village in Ukraine. Unfortunately they only seem to have one dress each which must smell of wee by now. I’m all for equality and diversity 🙂

Verdict: sailing through to the final and the top 5 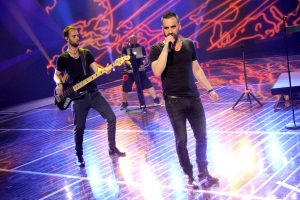 Dear me, it’s so ordinary. I can’t quite work out what the point of it is. He sings well enough, but I don’t I’ll remember it in 10 minutes … or for that matter one… 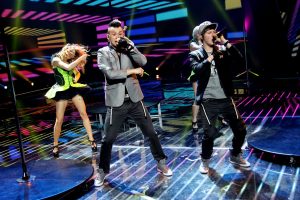 Poirot: I have met ladies such as these many times in Antwerp and Amsterdam and I….
Franko: That will be quite enough Monsieur Poirot!
Kryten: They remind me of the deranged android that try to kill me.

They may have learned their dance moves from Lubby Lou but this couldn’t be a better draw for Moldova. The song has really grown on me in the same that Nelly did 3 years ago. Watch it go! 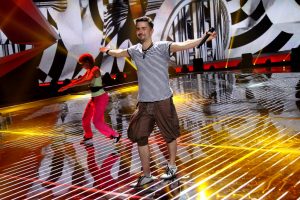 Poirot: I like the gypsy violins. They have them many in Belgian restaurants.
Kryten: I like that. I’m going to teach it to Holly.

Verdict: see yer Saturday but don’t worry about making room for the trophy in your baggage.

No one’s going to pretend that Jedward can sing … or dance… or do anything remotely talented. They strut around out of synch with each other looking like demented ring masters singing just like my audition for the Wizard of Oz at the school pay when I was 10 ie crap. They should by rights be condemned to being one of the people of Oz which was the fate of all crap singers in my class in case they got any big ideas of opening their mouths. However it’s last in the draw and Jedward have a following of sorts (albeit most of them coked off their pencil-top heads)… so.. 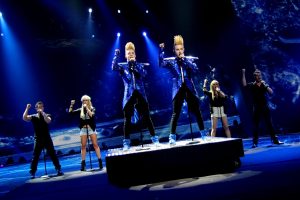 Poirot: It is an insult to music
Kryten: So that’s what happened to my spare heads. Hi guys!

Verdict: bound to make the final but not gonna be top 10 this year me hearties.

4 August – Smile and say you miss me