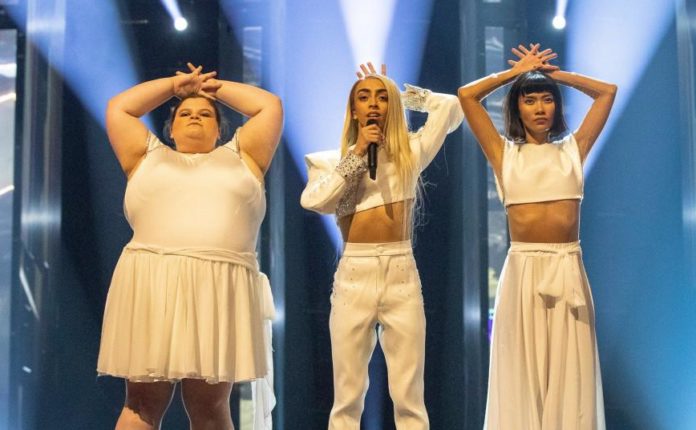 Obviously the thing you’ll want to know about is the hair. The choice of wig has been big news in certain Eurovision circles. The OnEurope public information remit obliges me to let you know it was lower-back length blonde. The sort of hair you’d struggle to sit on.

Everyone was in white (outfits by French-Israeli designer Dylan Parienty) and Bilal shared the stage with two dancers (including plus-sized ballet star Lizzy Howell). The song sounded to have been rearranged into a lower key.

The sound was a little low in the Press Centre meaning we struggled to hear the vocals – although the later video clip (scroll down) suggested an improvement on what we’ve heard at recent preview parties.

As Lizzy danced, we saw viral videos and the phrase ‘people judge me on a picture’ along with tolerance buzz words. A second ballet dancer (Lin Ching Lan) appeared to the message that people insisted she couldn’t dance being deaf. The end message was that we are all kings and queens.

He’s all in white with the long wig on, and begins with projections on his face. Then we get a plus size dancer followed by, possibly, a deaf girl dancing with sign language. Inspirational messages litter the backdrop, and the lad himself sings it pretty well. They’ve certainly done a good job on it, turning an average song into a most watchable performance! Great work!EUROVISION APOCALYPSE