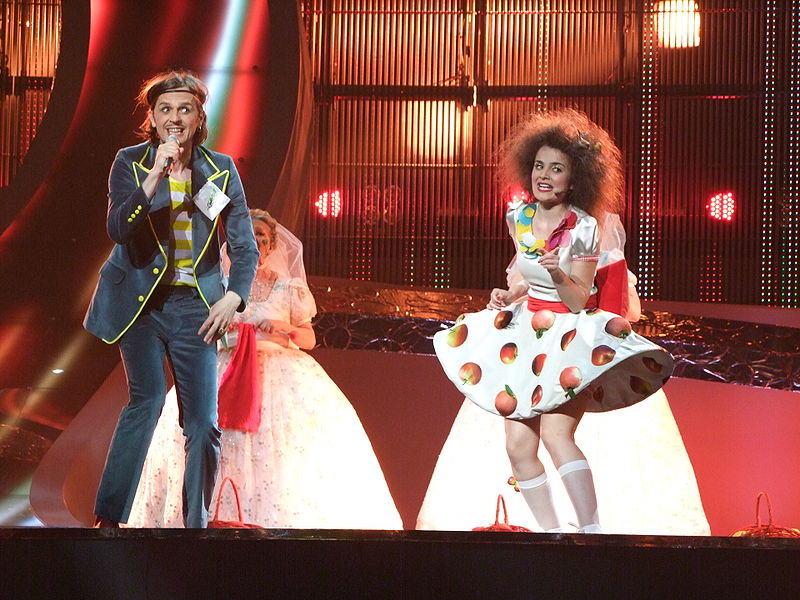 He starts off in a washing basket, with four knitting brides behind. Then everyone just runs about a bit in front of a washing line, while doll-haired-gal totters about a bit. Nearly everything about this ‘un is lovely, and as such it’s doomed to the dustbin of nearly weres. Curse it!

Dustin is also flippin’ fab, and in so many ways. Despite people dismissing it as a mere gag, it’s the most intelligent and well considered lyric in the contest. And while the less bright fans complain that he shouldn’t be in the contest, cos here’s well not entirely human like, they forget that he’s possibly the most experienced act chart-wise that the Emerald Isle has ever sent. And best of all, it would really annoy the Irish if this was the song that brought the contest ‘home’ for ’em. Heck, it makes the 1/16th of me that’s from Cork bristle with Gaelic pride!

I’ll also concur with the F man on Poland’s chances. She’s a class singer – to the point where even the odd flat note doesn’t seem to matter, looks a treat and knows how to work the camera. I’m no great fan of this song in theory, but at the mo, in contest terms it’s head and shoulders above the rest.

Oh, and thank you to the correspondent who pointed me the way the the Shellac show last night. It were flippin’ fab, too! Twas on an open topped boat at the very confluence point of the two rivers – kind of about 8 O’clock on the map of Belgrade that is this year’s stage. You could see the Kalmegdan castle off the port side, and that gurt big Island from the starboard – the mountainous tower blocks of Novi Beograd twinkling willfully behind Steve Albini‘s ever twitchy shoulder. And every once in a while a massive hundred-yard barge would steam quietly by. One of the best give venues I’ve ever been to, and possibly on of the top five shows I’ve seen in the last ten years. It’s a shame that few of you would have enjoyed it, so here’s a bit of them to be getting on with some learning…