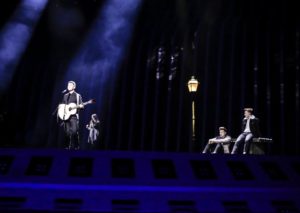 Ireland’s second rehearsal is our third of the morning. This isn’t really working for me at all. It’s not the staging, which has frustrated some people, it’s the song. It’s just not strong enough. I get that it’s probably Ireland’s best entry in ages, but RTE just still hasn’t got this gig sussed.

Since I heard this I’ve been concerned about Ryan’s upper range. He sounds too fragile when he sings here, and it suggests a lack of confidence. It certainly presents a fragility to the viewer, which may be keeping with the song, but with the ballast around it this isn’t selling itself sufficiently to the viewer.

In his own words: “We wanted to show different relationships in the staging of our song, we start showing one with me and my friend, the piano player, so that’s a male and a female, then we have two guys showing the physical emotions of a relationship, expressed by the dancers, and in the end we are joined by the two, female, backing singers so we have three different types of relationships represented on stage.” – Ryan O’Shaughnessy