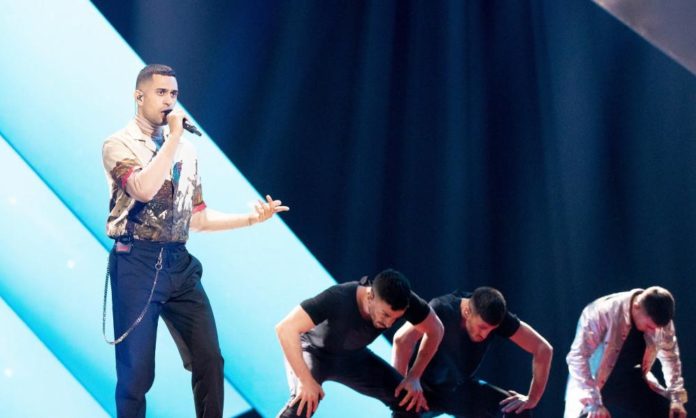 Mahmood enters the Contest as a fan favourite – and if rumour is to be believed, laid low by a dodgy cold.

The air in the Press Centre hung heavy with disappointment, mostly on account of dreadful camera work with way too many wide shots, dark staging and dancers who looked out of place. It brought to mind the let down of Francesco Gabbani a few years back.

Mahmood connected well with the cameras, wearing a beige turtle neck sweater – which I’m told might not be his final outfit – and a colourful shirt. The dancers were in silver jackets for the second run-through. The words to the song have been translated into English and projected on the back screen.

Coming to the stage as a favourite brings a weight of expectation and when things don’t quite match up, we tend to complain the sky is falling – look at Duncan, for example. The italians do take things seriously, so expect to see changes before the second run-through.

(Edit: By the third rehearsal, there were fewer wide shots)

Dead simple and full of style and passion. Three understated dancers, incredible background screens, occasional translations, and a brooding lead performance from the las himself. Very nice indeed – no clue where it’s finishing though! EUROVISION APOCALYPSE