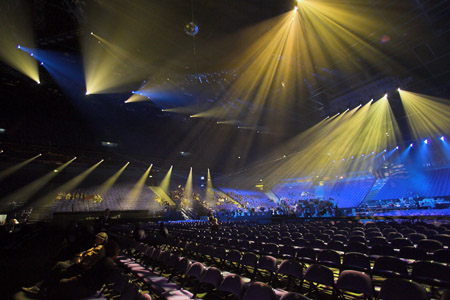 It just goes to show, doesn’t it! We can consider ourselves experts, watch every last minute of every last rehearsal, make our considered judgements and still end up absolutely rubbish at making predictions! I’ve yet to meet anyone that got more than six (although I’m sure there’s a few among you who’ll claim a resounding ten out of ten), but the somewhat surprising results last night just go to show what a fantastically unpredictable and democratic competition this is.

Let’s start with the good stuff. I wanted Moldova to qualify so bad but I never thought in my wildest dreams it was going to happen. Until I saw the Boonika weave her shamanic drum magic on stage, and then I just knew. I’m so chuffed for the boys, and there’s a reet proper bandwagon kicking up for them round these parts. They couldn’t, possibly, could they?

Hungary’s the ideal opener, Norway and Romania (drawn together again – I can hear the stagehands throwing themselves into the Dnepr in anguish already!) are so visual and fun that they’ll make great WTF telly moments and Switzerland have probably got the best draw of the lot.

Then there are the other five.

Israel I could see, even though I’m not a fan. She performed it well and it looked great on the screen. Just a shame it beat Monaco and a big surprise it hammered the Netherlands out of the contest as the big girl ballad. But how will she fare against the Maltese heavyweight, I wonder? The rest were a bit perplexing. Croatia I had on my list, but thought it might struggle, Denmark I figured would be bottom of the pile and Latvia I thought might even be lower than that. But they were both nice smiley, optimistic songs your mum would like, so I guess that’s what saw them through. Which leads us to Macedonia.

The most common thing anyone said at the after show last night was “Macedonia???” It’s a pleasant enough song, and Martin himself is a personable kind of chap, but I never thought it would have the legs to nip it – especially when you consider some of the songs it beat. I’ve been a fan of this contest for 35 years, and have been coming to it for the last eight, and still nothing can prepare you for the funny old twists and turns of the accursed thing. Heck, even our mate on the Macedonian delegation didn’t think it would make it through. But good on you mate, you deserve it.

Of those that didn’t make it, Belarus were the most crestfallen. They’d shipped busloads of fans swathed in the green and the red into the arena and there were a lot of sunken shoulders, lowered heads and discarded flags on the floor when we all shuffled out of the hall. They thought they only had to turn up to win it. I can’t wait to see the breakdown of the voting when it finally comes out.

You might have to wait for my next report though, cos I turned my ankle on a cable when I was skipping out of the arena for an ice cream last night and I can’t put any weight on it at all right now. If you’re reading this any time early on Friday afternoon I managed it! Right, I’m off to learn how to walk again.

So Russia to win it then