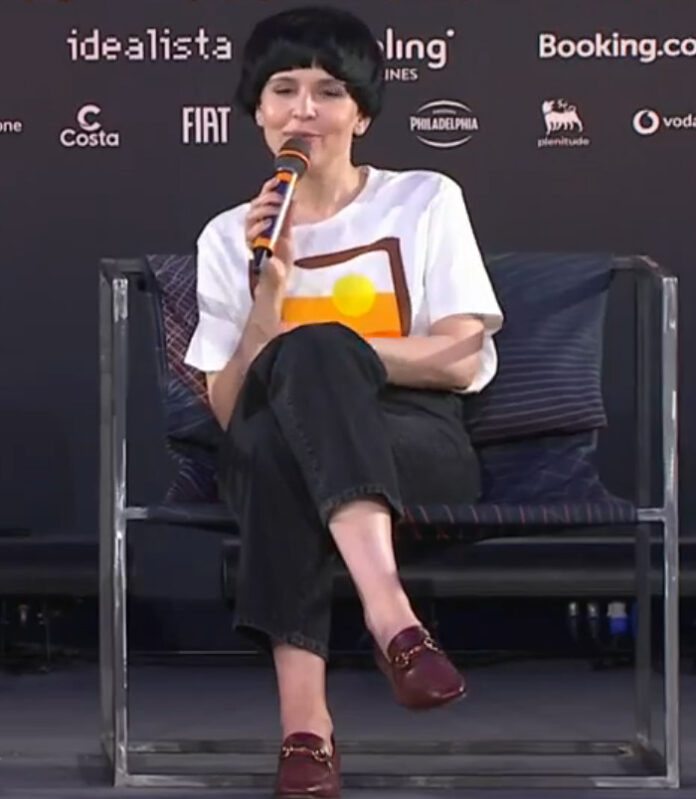 After a short pause in proceedings, presumably for pasta.. or pussy, who knows, the Lithuanians were next to face the hordes of press!

Monika, sporting the 1970’s bowl hair cut, minces onto stage and says that being in Italy is a “living dream” – well that’s one word for it. She then regales us with the fact that she has been to Perugia before, and that this is the only chance for her to participate in Eurovision, and in Italy too – she loves Italy.

She says that Italy feels like home with such “amazing beautiful” people and food and, apparently, she loved her breakfast this morning. This is the content that you have been starved of, clearly!

Monika has a personal astrologer (!) and a year ago she predicted that this May the Lithuanian singer would enjoy international success. I suspect Monika may have been making the facts fit the story she wanted to tell. The song is about being sentimental, and her most sentimental moment happened just a moment before the press conference, when she was on the stage and remembered being a little girl performing in her home town pretending to be a singer – well some things never change eh viewers!

A question about the language now – of course. Monika says she loves Lithuanian, as it is an old language and there have not been very many songs in Lithuanian, and she wants her home country to be proud of her. When she went to the Spanish party, and the audience were singing along in Lithuanian, she felt that she had made the right decision, and it was a proud moment. She reminds everyone that 1999 was the last time Lithuanian was heard in the Contest.

Musical inspirations next. Monika says she has been studying music for a long time and her biggest influence is Bobby McFerrin, but when she writes songs, they are inspired by herself … she thinks about music a lot. She tries to connect with the spirits and get into the zone and writes whatever comes into her head. She never had any bad messages about the song – she’s clearly not read this website then – apart from Lithuanians. I can tell you I’m not in Lithuania right now.

Her song is about longing, and how you drown in your memories and they come to you in the form of a clown, with the chorus about living in the sea of your mind, and roses are falling on her. A question that people wished they had never asked I am sure.

Lithuania has participated in the Eurovision Song Contest 21 times since its debut in 1994, where Ovidijus Vyšniauskas finished last, receiving “nul points”.

Lithuania withdrew from the contest, not returning until 1999.

The country reached the top ten for a second time in 2016, when Donny Montell finished ninth with “I’ve Been Waiting For This Night”, and for the third time in 2021, finishing eighth with The Roop and “Discoteque”.

As of 2021, Lithuania remains the only Baltic country that is yet to win the contest after wins for Estonia in 2001 and Latvia in 2002.

However, since the introduction of the semi-final round in 2004, Lithuania has more final appearances than the other Baltic nations, with ten, compared to seven for Estonia and six for Latvia.

Monika Liu will perform Sentimentai when she represents Lithuania at the 2022 Eurovision Song Contest.