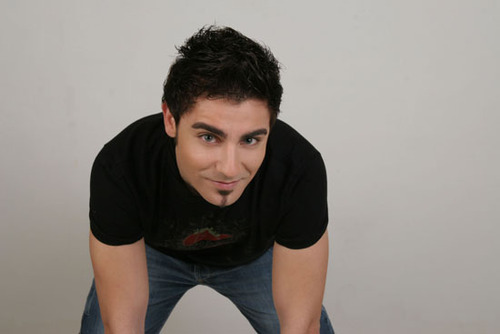 On Europe has been granted an Interview with the Maltese Winner, Fabrizio Faniello. Enjoy :o)

1) How does it feel to represent Malta at the Eurovision Song Contest at your 4th Attempt?

Winning the Festival was something that I care very much about. It is a chance to go abroad and perform in front of Millions of People. I have experience of TV, I am a co-presenter of a show in Malta so that will give me some experience.

2) How did you get to Work with Georgina and Paul Abela?

Georgina is my cousin, so it is a bit of a family thing really. They have past Eurovision experience, they have competed 4 times for Malta, so it is really helping me.

3) Is the song in the same style that you usually sing in?

No, this is really a big move away for me. The other 3 times that I sung in the Festival, I sung songs in a “boyband” style, like the BackStreet boys. I used to sing Ballads and songs like that. People would tell me it was good, but not right for the Eurovision, so this time, I sat down and said that I had to change style. People really seem surprised with this song as it is more “latino” than usual for me.

4) Has the Recording of the Single gone well in Germany?

Yes, we flew out last week and re-recorded the single. It is different from the song that won in the festival, It is stronger and has a better guitar section.

5) What has the Public Reaction been like to you winning?

It has been tremendous, just like a dream. The phone has not stopped ringing with people wishing me luck and saying ” We will win this year”. I say ” Hold on, it is really difficult to win the Eurovision, lets just get to Copenhagen and see what I can do”

6) Have you always been a fan of the Eurovision?

No, not while i was young. I originally wanted to be a footballer. I used to play left-back and was in the National team, but I had a passion for singing too. In 1998 my mother rang me and said “Fabrizio, Paul Abela has written you a song and you should sing it”. I was underage then so I had no choice. It was a good job that i did!!! In the 4 years that I have been singing in the festival I have started to watch the Eurovision more and more.

7) What was it like to be at the Danish National Final?

That was really great. The people seemed to like my song, which was great. I had the chance to speak to the Olsen Brothers. They are really nice people. They told me that I have to do a good performace firstly, and the song will come naturally. I also spoke to Johnny Logan, he is really nice. I had a cough in the week leading up to the Danish performance and he said ” Here, have this medicine” and he gave me a bottle .So now I have medicine from Johnny Logan, perhaps I can win the Eurovision!!!

8) Do you think that you can win in Copenhagen?

9) What do you want to do after the Eurovision?

Well, I will be launching a CD Album in Copenhagen so I hope that is the start of things for me. After the Eurovision I hope it starts my career. It would be a dream to win the Eurovision, but If I do not, that is my hope.

10) What is it like to be touted as a potential winner?

26 November – You’re everything and nothing in one

23 countries took part in the contest, which was held on 12 May 2001. The host venue was the Parken Stadium.

The presenters were Danish journalist and TV-show presenter Natasja Crone Back and the famous Danish actor Søren Pilmark who spoke most of their announcements in rhyming couplets.

The contest was won by Estonia, represented by Tanel Padar, Dave Benton & 2XL with the song “Everybody”, written by Ivar Must and Maian-Anna Karmas, which scored a total of 198 points.