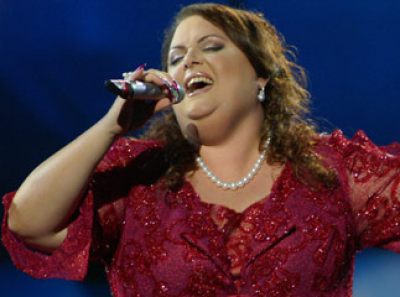 Franko: Well what can I say? Chiara comes on and is Chiara. She does all the usual hand gestures and the Chiara wink. I love the song but she’s missing quite a few of the notes at the moment. In fact at times she misses them so badly that they’re in someone else’s song! Quite possibly Krassimir’s judging by this morning 🙂

I still think this is sailing through to the final and will finish top 5 but it needs work. Being an accomplished and experienced singer, it shouldn’t be a problem for her. Though she may well be overshadowed by the song that comes after her and I don’t think it’s often that Chiara has been overshadowed by anyone 🙂

So in spite of the fact that I never want to step foot on the island ever again and will quite possibly never trust a stranger again (private joke!) I think this will be in with a pop. Perhaps third time lucky and a holiday in the sun next year 🙂

Phil: Now – don’t get me wrong – I love this but just not quite how she sang this. The first time round she got to two minutes, hit all the big notes with a brick, however and smashed right through them!! The second and third times … not so much. Now, I am well aware that this is a first rehearsal and she could have ear or balance problems, but she is going to have to do a rescue job on this one as it stands. Although – to be fair, she performs the song and I still love it to pieces!! but Chiara to Resus please to get this song sorted…