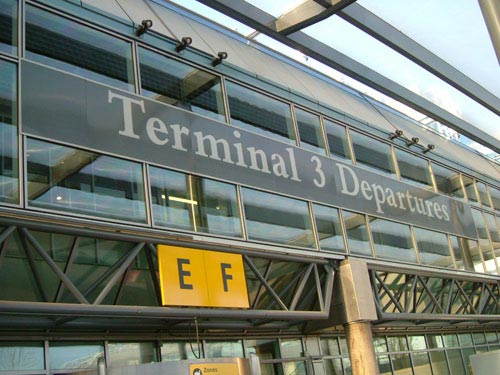 Battling through the London morning rush hour to meet That Monty at Heathrow terminal three (flight’s on time) though perhaps That Monty will have forgotten it’s terminal three and be sat all on his lonesome at terminal five… Eek don’t joke eh?!

So we will miss most of the rehearsals today and again be relying on the clip ettes online and our esteemed colleagues there on the ground. Watch out for Sweden today. Måns exclusively revealed to me last month at the London Preview Party that he would still be bringing a graphic to perform with in Vienna but it would be different. Apparently the stick man will be fatter, he’s put a bit of weight on during the spring it seems (the stick man, not Måns, am sure he’s buffer than ever) and the fat stick man will have lost his umbrella but he wouldn’t reveal what other prop would replace it. So there you go, an Oneurope exclusive. You might as well not even watch the Swedish rehearsal! Watch it be totally different now and transpire that he was pulling my leg. He could pull any old darn thing he likes…

Mmmmm now I know the video backdrops feature heavily in the clip ettes provided by eurovision.tv as it’s from a single, static camera at the back of the arena but I’m feeling they’re being over used this year. Nearly every country has one and I’m finding it a bit much. Hoping when I see the full run thoughs they’ll be more subtle.

LITHUANIA
I love the duo’s chemistry and interaction and this is such a happy song. The backdrop is too busy for me though and why is Vaidas trussed up like he’s performing at a holiday camp. This is holiday camp cabaret with the emphasis on camp.

IRELAND
I’ve loved this from the moment IRELAND chose it. Very happy to see they’ve staged if intelligently and simply and this just works and I hope that IRELAND make the final. A pretty backdrop that works for a pretty song.

SAN MARINO
I really don’t like this song very much and the staging is as you would expect. They look a little but lost up there and do we have to have another globe backdrop? Not working for me.

MONTENEGRO
This looks strong and sounds strong. Looks like they’ve rehearsed it within an inch already and it’s Balkan by numbers isn’t it? I love this style, always have and always will but don’t think it’s going to sweep the board next Saturday but neighbourly votes will give them a solid result.

MALTA
This song has been completely forgotten as it was chosen three years ago last Tuesday! The curse of hosting Junior eh? I’d hoped a good staging would resurrect this song in my mind but I find the whole thing forgettable and uninspiring. Which is a shame considering how much effort Malta put in each year.

NORWAY
Ahh thank you Norway for a simple staging and restoring my faith. NRK’s wardrobe department love white don’t they? I’d have gone for something a little more subtle but this is sung and staged beautifully. Hard to tell from this clip ette but I’m sure Mørland and Deborah are interacting well. I LOVE LOVE LOGE this and it has to do well.

PORTUGAL
Poor Portugal, following Norway with something very dark and brooding. Too dark by the looks of it? Now I quite rate this song but I always liked a bit of cheap soft rock! I’m worried Leonor is going to struggle vocally and overcook the emotion. Can’t believe I just wrote that as a criticism, Rosé West, never knowingly under cooked!!

CZECH REPUBLIC
Doing exactly what you’d expect from these two. Lots of angst, lots of striding, lots of shouting at each other across the stage. I’m not fussed for this song but I like the singers and I hope they pass to the final seeing as they turned up this year.

Right, just arrived at Heathrow. Time to find that Monty and see if we can blag an upgrade. More from us later and see you soon Vienna!!