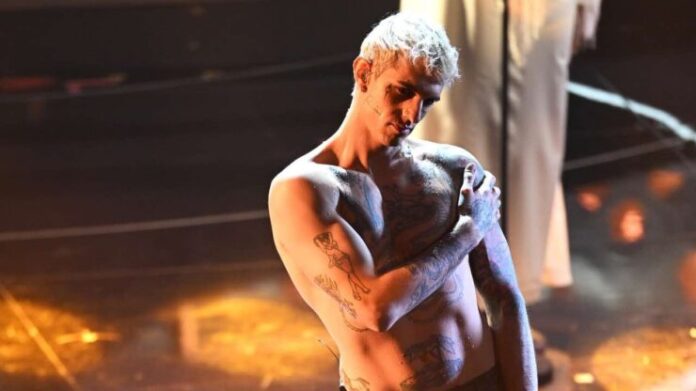 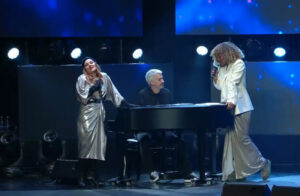 After a week of larking about in what looked like the craft department at SMRTV, tonight we got to play the big game and pick a song that can represent microstate San Marino at the 2022 Eurovision Song Contest.

It’s been a week of ups and (often) downs as a bunch of ’emerging’ acts flexed their musical muscles in low budget settings, facing the vote to make tonight’s mammoth 18-song competition.

Senhit was on hand to shout and camp it up, and offer advice on how to book a big name act then fail to set the scoreboard on fire. Oddly enough, she didn’t suggest finding a decent song that people might get behind.

Anyhoo, I’m playing for time here. The winner/act who represented the most lucrative proposition after much to-and-fro and a voting process that made zero sense was Italian singer Achille Lauro with ‘Stripper’. It took ten people to write the song. No, seriously, it did.

And if you loved the low tech way San Marino picked a song, tune in again next year. Same time, same place. Una voce has been commissioned for a second season.

San Marino has participated in the Eurovision Song Contest 11 times, debuting in the 2008 contest, followed by participation from 2011 onward.

The nation did not participate in 2009 or 2010, citing financial difficulties.

Having failed to qualify in their first four attempts, the nation qualified for the contest’s final for the first time in 2014. Valentina Monetta represented San Marino in 2012, 2013 and 2014, making her the first entrant to participate in three consecutive contests since the 1960s.

In 2019, Serhat managed to qualify to the final, marking the second appearance of the country in a Eurovision final and achieving their best result to date of 19th place.

Following the 2020 contest’s cancellation due to the COVID-19 pandemic in Europe, their 2020 candidate Senhit was again selected to represent San Marino in the following contest and is the nation’s most recent selected entrant as of 2021. She qualified to the final, making it the first time that San Marino made it to two consecutive finals.

Achille Lauro will represent San Marino with ‘Stripper’ for the 2022 Eurovision Song Contest.