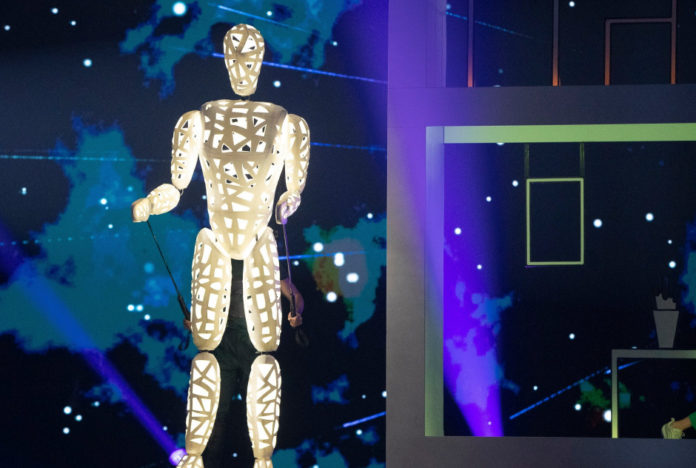 The Press Centre was rammed with the Spanish press.

We started with a series of cubes representing different rooms. Miki gets up and heads downstairs to join his mates for a jig. There was a lot of colour and then a sixth dancer appeared – a mannequin on stilts to shake the ‘house’ set and get everyone up out of their lazy beds.

At one point, Miki got his hands on a GoPro to (supposedly) record the audience and project footage onto the backdrop. Anyone in the Saturday evening mosh pit who doesn’t want to be seen by 200 million people best duck.

Of course, there were fireworks.

It just crossed my mind, I ought to talk about the performance. The vocals were fine – nothing spectacular, but it’s not that sort of song. The thing is, you kind of forget you’re supposed to be concentrating on what’s being sung with all the distraction.

It was very colorful, very manic – maybe a little too manic. If it gets drawn for the first half, it wouldn’t surprise me to see it up first (to open the show). If it gets second half, it feels like it’s going to close the whole shebang.

Did Spain just happen, or are the mushrooms kicking in?EUROVISION APOCALYPSE