And the problems don’t lie with Miki. He sang ‘La venda’ to its fullest potential (although, I still think it’s two choruses too long). The issue I had concerns the performance as a whole.

I appreciate it’s an uptempo song. I also appreciate you need to show that energy on stage … but there is such a thing as putting too much into it, and that is what ‘Greek staging maestro‘ Fokas Evangelinos has done. 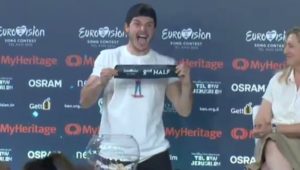 The house idea is lovely, but the wicker man shaking everyone awake is a prop too far, and looked frankly ridiculous. What followed was – to me –  messy and disjointed. The only decent part of the staging was the last 30-45 seconds, where we saw Miki on stage with the backing dancers simply having fun.

Spain had a great little song and had they kept the staging simple, it would have worked better. Instead they’ve thrown the kitchen sink (and the fridge freezer, microwave, integrated hob and dishwasher) at it, and I suspect it might not do as well as the Spanish fans had hoped.

Spain will perform in the second half of the grand final

17 January – A caress, a sweet kiss and an apology

RTVE  announced a new national selection to take place in Benidorm, with an open call for entries.

The selection will consist of three shows, on consecutive days (two semifinals and a Grand Final).

The competing entries will be revealed in November 2021, while the competition itself will take place during the first months of 2022, with the most probable option being January.