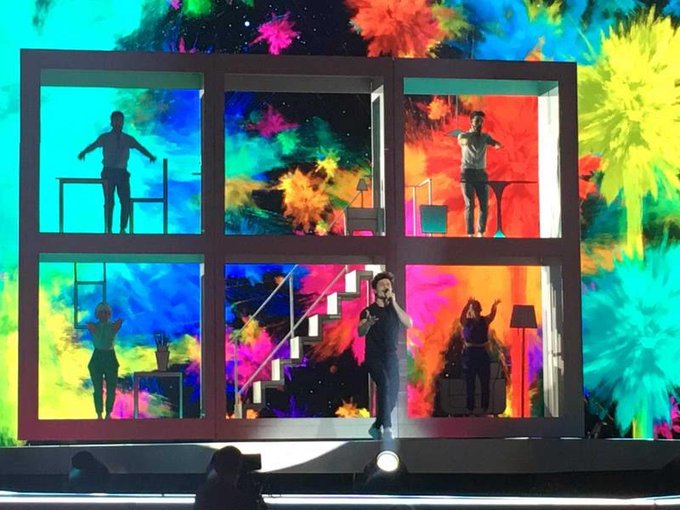 It seems they have mocked up Miki’s house for the first minute of the scene as he walks through almost waking people up in the house and having a party. It’s all very colourful and normal…

And then they have shoved on stage a massive mannequin on stage and my first thought was “why?”. Apparently it’s shaking the house so the singers move back and forth but, if truth be told it’s a gimmick too far for this song because there is already so much colour and things on stage do you need something else?

Thirdly there is then a trick with Miki using a go pro to take pictures of the crowd that didn’t seem to work because, well, there wasn’t a crowd so I’m yet to be convinced about this. The performance on the whole is like a stream of consciousness without any punctuation and people are going to be assaulted by so much the average televoter’s brain is going to go “ping” and that’s going to be a massive problem.

They’ve taken a fun song and over produced it to shit.

But, and it’s a big but, Miki manages to pull all of these strands together to make it a coherent staging concept but there is *too* much in it and it looks messy.

Can Denmark not borrow those stairs? It would make things a lot easier!

Can Denmark not borrow those stairs? It would make things a lot easier!