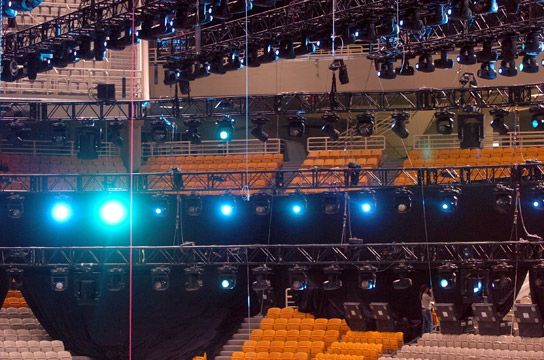 …but I’ll rejoin her shortly.

When I was writing my previous blog, sitting comfortably in the press centre, I was joined in short order by a Franko and a Phil, and I said to them “Why aren’t you watching Portugal?”

“It’s cack,” was more or less what they said, because even though this blog is rated Unsuitable For All, I am not Silvia Night and I do not bothering say whatever I darned well like. Naturally, I rushed into the arena, having been given these glowing reviews.

It’s not that bad, to be honest with you. The song’s a bit of a clonker, all that brass stuff makes it seem oddly downbeat and outdated for an uptempo, but they were making a bright enough fist of it. I probably have no business comparing them with ENI back in 1997, but what the hell, I *am* OnEurope, hear me say chalk is a bit like cheese. Still, it’s a long way from being the worst thing in the semifinal, and it only needs to be 13 away from being the worst in order to qualify. I doubt it will, but I might be in for a surprise when I rank the field.

Carola, on the other hand, is the personification of slickness. Some years, some draws, the slickness would not be an asset, but at this point it’s a welcome breath of fresh air – or at the very least, a tidy blast from a wind machine. Pretty much the Melodifestival performance, but I’m just not seeing a wasted step, everything is there for a good reason, and whatever each-way odds you can find at this point for the whole shebang – seriously – they’re worth taking. It’s not quite to my taste, but you don’t always need to love a song to know that other people are going to love it.

All being well, Sandra will have finished stretching her vocal cords by now, so I’ll see what sort of fist she can make of following Carola. Toodles for now.

9 July – You are the cream in my dark tea, it’s sweeter than honey