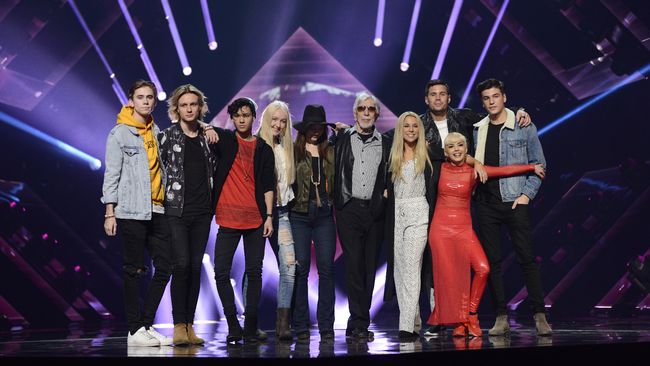 This week, we’re in Växjö and seven more acts are trying their best to win places in the Melodifestivalen final. Two will make it. Two get to sing again in a fortnight’s time.

After my initial success at picking the winners in week one, I did less well last week. Still, I wasn’t a million miles away and I stick by my tip for Mariette in the grand final.

So, without any further ramble, let’s get into the acts for this Saturday.

Robin Bengtsson – I can’t go on

The title is the very phrase I hope he utters when they call his name on Saturday. There’s nothing in this that appeals to me in any way. Robin seems to  be aiming for sexy, but comes across like a flailing sleaze-bag. Repetitive in the extreme. In case you didn’t pick up on it, I think this is a bag of shite.

You know how sometimes you hear a song and you know it was written for Eurovision? A melody that would never merit any attention elsewhere (Fairytale, anyone?). Krista has been handed a dog of a song that has Melodifestival stamped all over it. Things start fine, it’s a typical downbeat build. But then, when the chorus comes, things get shrill. She’ll more or less certainly get a second chance, but it doesn’t excite me in the ways I hoped.

Strummy guitar, poppy chorus and a cute boy who seems more than able to hold notes live. It’s not the greatest song, but in a weak line-up, this feels like a qualifier.

There’s something about this one that grabs me. Of course, it’s Sia lite, but still it stands out. That said, the rehearsal clip suggests the staging might let Jasmine down – she’s too alone – although you never know what might be to come. This is my tip to win this week. By miles.

It will raise smiles, and maybe pick up points from old school ironics. But really, it’s as much of a fish out of water as a bag of sampi fries. It’s still better than Robin.

Sounding like it escaped from a UK national final, this poppy country number should sink without trace. Inoffensive is the best I can find to say about it.

FO&O – Gotta thing about you

I’m told this is one to watch. Perhaps with the sound off. It’s workmanlike, but charmless. It’s everything I despise in modern boyband music. Watch it go and win. Horrid.

So, where am I now after seven songs? Only one appealed to me – Jasmine Kara. The other qualifier looks like a flip between Anton Hagman and the truly awful FO&O. Whichever of them misses out might join Krista in the rematch show. I never need to hear Robin Bengtsson’s terrible song again.

The weakest selection so far to my ears.

Yep, agree the lineup was pretty poor after the bloodbath (sort of) of the first semi. Every song made me cringe, even the little Sia-nitta. BTW, Fairytale went Platinum in a number of countries and wasn’t that bad at all. Was played at my cousins wedding back in 2009 and everybody danced!