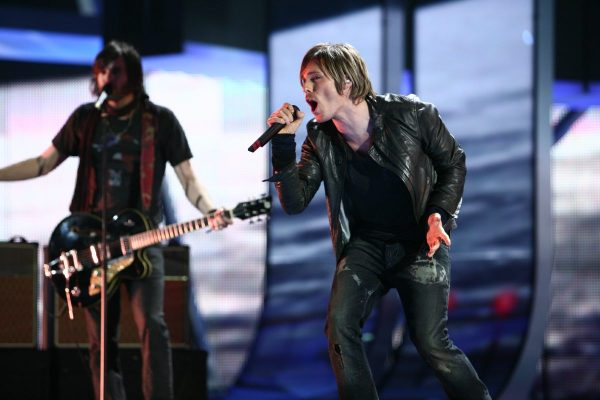 Franko: This does everything it says on the tin. Well known rock band performing a safe song as though they were in a gig with no real perception that they are actually in a TV show. It’s pleasant-ish and inoffensive but it ain’t gonna set the world on fire and it’s not very tele-voter friendly. Personally I can’t see juries going for it in great numbers either.The backdrop on the stage with the Swiss Alps is very effective, but they don’t move that much or make the best of the huge stage. If any act could have done that, it was this lot. It’s very middle of the road. You can’t really hate it, but equally I could see myself getting quite bored by it.. I don’t give it a prayer of qualifying I’m afraid whereas I think something with a much more memorable performance but less good song will trump it. And there’s plenty of those this year… just wait for tomorrow …

One more song and we’re done for the day. A gentle break in methinks 🙂

Phil: Can you hear that Europe?? – It’s Cow Bells, The Milka Cow mooing in the background and smell, the faint whiff of Eidelweiss – It can only mean one thing …

No, it’s not the sound of Musak, not even close – it is, however, The Alpenhorn-tastic Swiss and their ‘proper rock song’.

Despite saying that they were only in it because the Swiss Qualification threshold was so low, having seen this live I have now totally reappraised that situation – This is sailing through and is only one of two that I can say that about today – and the other one is coming next!!

The lead singer knows where the camera is and definitely knows how to use his charms to win over the televoters in the UK – and further afield!

This is very VERY good indeed – watch out for it later in the week.