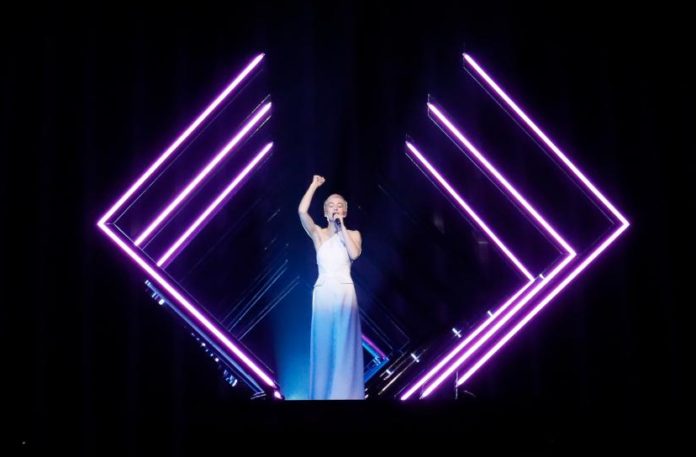 It’s the UK. Always a nervy moment, as even though I’m not patriotic, I do want us to do well. I love SuRie – she’s been a breath of fresh air on Twitter and knows exactly what Eurovision is about. I like the song, but I have to admit to its weaknesses too. What are we going to get?

SuRie is perfectly competent. She’s in a white top with a long white shirt and wide belt. Her performance on the BBC’s ‘Graham Norton Show’ gave us a hint of the staging; she’s in a kind of open light-box, a tunnel of neon strip lights stood on point to form diamond shapes. As the camera moves, the angles it picks up are highly effective and this is a great look. She’s got the camera angles already sorted, and performs directly to them, connecting to the viewer at home. You can tell she’s done this all before.

There’s some pyros on the final go; they spurt up from the front catwalk, but the camera all but misses them. A couple of cues like this to work on, but mostly it’s all in place.

Ultimately, it’s all down to the song, which few would shrink from telling you is just a bit limp. The arrangement doesn’t really bring this to life, and – at the moment, to an empty hall – this isn’t really coming hugely alive on screen either. That said, this is the kind of song to be lifted with a live audience in the hall, and is a perfect clap-along, so I expect there to be much more energy when she does it live, and we saw in Brighton how much she can turn it on when it matters.

It’s not headline news to anyone that we’re not going to win this year, but if nothing else, we look good on screen and our artist does a great job of representing us.