For my life, the UK can’t stage anything when it comes to Eurovision.

Yes, Michael was discovered through a casting show, but why did it need the Eurovision staging need to look so much like an X-Factor final performance? All that was missing was a confetti canon. I know the BBC are (admirably) farming much out to independent production companies, but this felt too much like the work of ITV Studios.

Micheal’s voice wasn’t in question, and the backing singers blended really well. The problem was that it looked and felt like … a big pile of meh. By which I mean nothing stood out. There was no real highlight. Even when the backing singers appeared (around two minutes in), the pace stayed level. 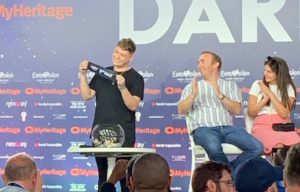 Micheal’s hand movements throughout seemed wooden and forced, and will someone have a word and let the boy know that vocal twiddling isn’t needed. He simply needs to sing the song and look down the camera.

There was nothing here to make anyone think “that’s the one” and pick up the phone to vote.

Maybe I’m channeling my inner grump, but I predict another 16th-25th year.

The UK will perform in the second half of the grand final.

UK in the fog, trying to make finger clicks a thing like clapping for Italy. Michael’s voice is SUBLIME! The staging is actually rather lovely, even with the ring of fire.OGAE Australia