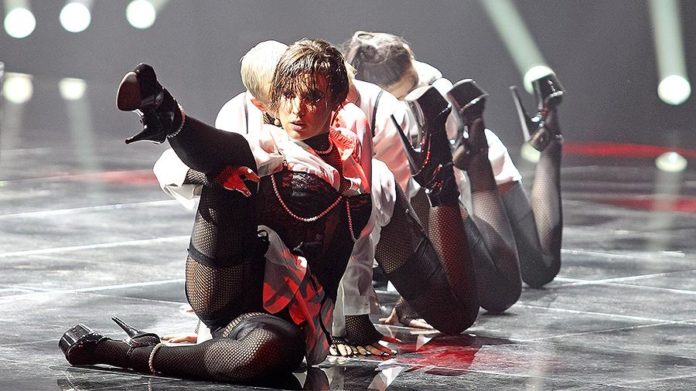 What? Well, you didn’t think I was going to let something this juicy go unreviewed, did you?

As we embarked on this year’s national final season all seemed to be running smoothly in Ukraine. The Vidbir format was once again in play, and previous judges including Jamala and the man behind Verka Serduchka were rebooked for the gig. As the songs appeared online it was clear we were in for an interesting selection musically. Who knew that music would end up as the least intriguing aspect?

Once MARUV’s Siren Song dropped it was a strong favourite, and as she sailed through qualification and upped the ante in her final performance so many of us willed this to victory. It’s a big, brash, ballsy, in your face pop song with a performance to match. Incorporating lesbian chic, there was more than a bit of male-gaze to the same-sex emoting on stage, but you never got the feeling MARUV was anywhere near being forced into a t.A.T.u style exploitation just for controversy’s sake. Here was a woman in charge.

Despite being subjected to an entirely odd moment of interrogation by Jamala about the sovereignty of Crimea in a “mock Tel Aviv press conference”, come the voting, job done, and this leapt to be a favourite for the overall Eurovision crown. Until it came to the finer details of the contract. MARUV’s links to a Russian label, and plans for upcoming gigs there, appeared to present a problem for the Ukrainian broadcaster, with MARUV claiming other hastily arranged contractual obligations would force her to cancel paying jobs and undertake promotion she felt akin to nationalist propaganda.

Grabbing her integrity by the horns she pulled out, quickly followed by the second and third placed acts who likewise refused to be restricted this way. Faced with such a fiasco the broadcaster itself pulled out and Ukraine won’t be taking part this year. It’s left a bitter taste for many, who thought this would have made a fine Eurovision entry, and even a third winner for Ukraine.

There are many significant issues affecting international diplomacy between Ukraine and Russia, not least the unlawful invasion and occupation of the former’s territory by the latter, but this is the fourth consecutive year this has spilled into the Contest and the second time one of the pair has felt obliged to withdraw.

The loss this year is MARUV’s, the Ukrainian viewers’ and ours as fans of this event. What this song could have achieved will now forever be moot, but for me you could file this with La Casa Azul’s Revolucion Sexual as Eurovision winners that were never to be.