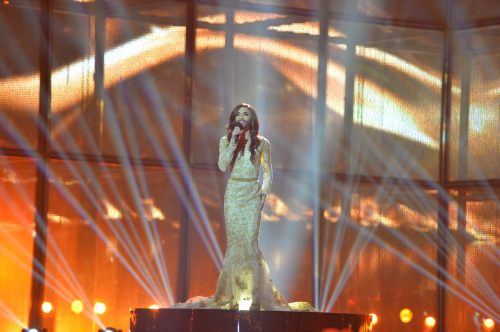 Indulge me, dear reader, in a bit of a personal journey with this.

Last year I wrote on this very site that Conchita was only selected so that ORF could have a good exit strategy when they failed to get votes from a line east of the Danube. I believed this wholeheartedly.

When I got to Copenhagen, I still believed this, right up until rehearsal number one where I got told that ORF did indeed want what I suspected all along - a "gay song" with lots of stompy stompy shit that would have been their way out..... until Rene, Conchita's manager, said "no - we play it straight". They then proceeded to put Rise like a Phoenix into the contest.

Not content with this, ORF then tried to f*ck up the camera shots. Each delegation was told to give a camera plan and the one ORF came up with was neutral at best. Rene submitted his own ( the one seen by Europe). It seemed I was right, ORF were doing everything they could to not win - and Conchita and Rene were doing everything to win. However, I was still not convinced about the song.

Fast forward to Thursday Night's Semi 2. I have sat in my backstage seat next to OnEurope's Roy D Hacksaw and Conchita came on stage. I have never in the last 14 years of me doing this, felt "Eurovision" wanting something so badly. This even eclipsed Senhora Do Mar levels of anticipation. Everyone in that hall wanted Conchita to knock it out of the park, the roar as she came on stage was deafening and it didn't stop until she started singing, and the came back near the end like a wave of love towards the stage.

Ikkle me, watching this, suddenly got goose pimples before she even started singing and it was those 3 minutes that converted me. This was still a bearded lady drag act but damn did she have the song and voice to get over that.

The shock factor was gone from the moment the postcard started, viewers knew what was happening and what they were going to get.... or so they thought... what they got was a performer who can sing the song they wanted to sing, about a subject close to their hearts and they connected with the world. I have said many times this year, and previous ones, that for a song to connect with the voting public you need to believe the words you are singing - there is no doubt that Conchita did that, and it showed and was rewarded.

I applauded like a fangirl from about 10 seconds from the end until she went off the stage. I had seen the future, I had glimpsed Saturday Night and it would have a beard. For me, there was no doubt this was qualifying and, yes, possibly winning the contest. If only I had the courage of my convictions to bet on her.

Danny La Rue, Hinge and Bracket, Paul O'Grady, Edna Everidge - all drag queens with mainstream niches and mainstream acts... why can't Conchita join that list?? Hotbed of sodomy the Russians tell us - most gays will go "where???"  I refer you back to a phrase I posted after the 2007 contest - "You can enter anything you like, as long as it's good" - They, and I, should have remembered that.

Austria has participated in the Eurovision Song Contest since its debut in 1957.

Austria currently holds the record for longest gap between wins, with 48 years between victories.

Vincent Bueno will represent Austria at the 65th Eurovision Song Contest with a cheerful little song about death called ‘Amen’. Party on.