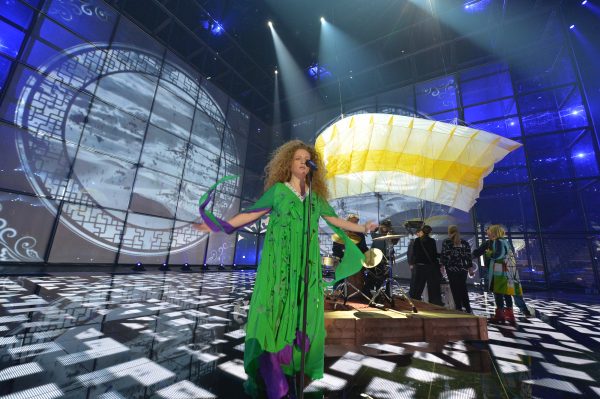 Georgia is probably the strangest three minutes you’ll hear this Eurovision. We have a saying that once you’ve heard a Eurovision song three times you kind of like it, even if you don’t. The familiarity must be kicking in because I actually don’t mind this now. It’s a cacophony of yodelling, guitar, drumming and Marika warbling over a prog rock backing track. All this and a man suspended from a parachute too. Marika is dressed in a full length bright green frock with things tied onto it. With her shock of frizzy hair she looks like Rebekah Brooks dressed up as a Christmas tree. It is the most ill-advised look I’ve seen for some time. It’s so unusual I might even stick my neck out and say it’s going through, it certainly has a smattering of supporters in the press centre, although one of those is Keith Mills so it’s probably doomed. Eurovision has never seen the like of it, and may well never do again.

Georgia has participated since 2007. Although Georgia did plan to participate in the Eurovision Song Contest 2009, it decided to withdraw after the European Broadcasting Union demanded it re-write its song which made reference to the Russian prime minister, Vladimir Putin.

Their songs might be generally a bit on the rubbish side, but their parties during Eurovision weeks are legendary.

Tornike Kipiani will represent Georgia at the 65th Eurovision Song Contest with ‘You’.