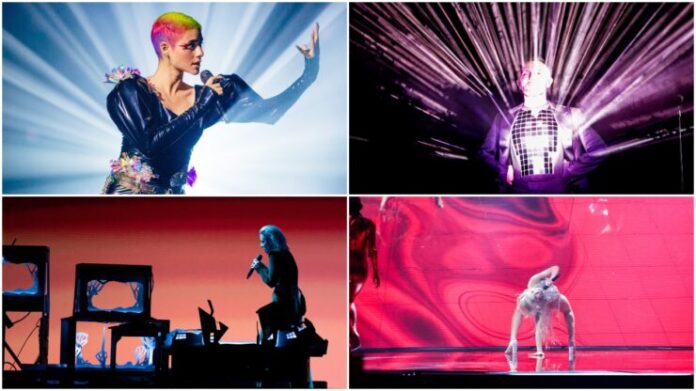 Day 5 continues with the next 4 countries to rehearse.

She’s not there, we know that, but I had left the Swedish rehearsal ‘room’ feed going (we have to click into a new ‘room’ for each rehearsal or press conference feed) and when I clicked back we had a stream of the ‘live on tape’ recording, but without any audio. I only caught a tiny bit but it’s quite dark with lots of small spotlights, and features Montaigne with three dancers. It’s difficult to tell how it will sound and look properly, and what, if any, the impact might be of a switch from arena to studio, or indeed whether her inability to be there in person generates any additional sympathy support.

Unfortunately, on top of all of this, she’s up against some much stronger competition, and I think this is going to be Australia’s first non-qualification. It difficult to know whether the distance and the isolation from her fellow competitors would make this easier to deal with or not, but after all the setbacks she’s had to endure since the joy of winning Australia Decides a full 15 month ago, I hope SBS has got the right support around her.

I keep forgetting to click into the “rooms”! I missed Vasil’s first go save for the bit where his disco ball vest is glowing proudly. When I finally do get to see it Vasil is giving it his all. The vocals are full, the emotion is fuller. There’s nothing half-cock about this.

I heard the delegation used some of the rehearsal getting the light effect of the spotlight bouncing off his disco tits just right, and gotta hand it to the creative team this does create a moment.

This, and Vasil’s clear vocal talents, are the selling points for North Macedonia and they need to be bought. As committed as Vasil is to his song it’s up against some big hitters today, with very few qualification slots going begging. Ultimately the style may just be a little too old-fashioned for the modern competition, though after all he’s been through, I would be delighted if Vasil can hold his head high in the final.

It’s all eyes on the Emerald Isle after Saturday’s intriguing single glance at a complicated set. Today Lesley really shows us how this is meant to look. There’s a series of props used as frames for the camera, shot with tricks of perspective, that place Lesley in stylised forests, and under waves. She moves from one to another sometimes by just turning to her side and the next prop is set up ready. The camera eventually cuts into a lengthening shot where you see all the contraptions she’s used to create these effects – a bit like revealing the workings behind the scenes.

On screen this is highly effective, and this rehearsal is really quite superb. It’s so different from everything else, and the fact it looks like special overlaps but is in fact all rather analogue just adds to the charm once they give you the clever glimpse of how it’s done. It’s no wonder most people left Saturday’s rehearsal confused, but now it’s clear what they’re doing this is very, very good indeed.

Cyprus was another oven-ready, out of the box rehearsal that kicked us off on Sunday morning, so there’s little work to do for Elena and her team. It looks and sounds great. If I had to be picky I’d have to say this looks very “made for Eurovision” after such an unexpected staging from Ireland immediately before it, but it ticks those Eurovision boxes, and it ticks them well. This should be a good top 10 result for Cyprus.