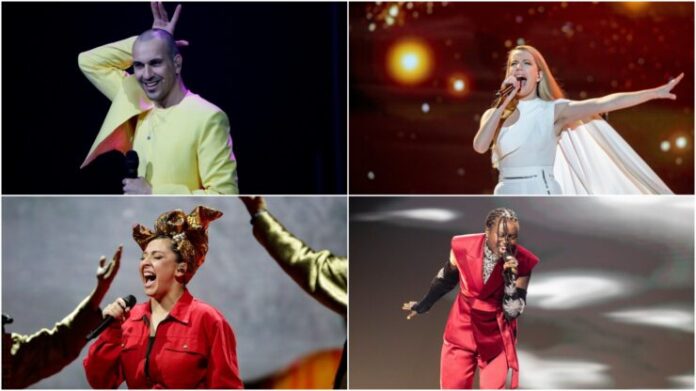 Goedemorgon Oneuropeans, and welcome to my updates from Day Five. Semi final one (most of), rehearsal two. We’re only missing Malta, who’ll be first up tomorrow morning. Twenty minutes each and a rapid turnaround of just five minutes between countries.

Today’s the day when we should see performances coming together. Who’s done their homework? If anything needed tightening up, have they clenched?

Given the quickfire nature of the day I’m going to be posting in clusters – a few songs at a time. I’ll be looking out mainly for anything that has changed from Saturday and Sunday.

Apart from a tiny issue where Vaidotas’ mic pack came loose and he neatly tucked it into the waistband of his canary slacks without missing a beat this is oven-ready. Any one of these rehearsals could go out on broadcast and do just as good a job as a live performance. Each dance move, hand gesture and synchronised bunny-hop is on the money. It’s still not working for me, but it will for a lot of viewers. The colours are vibrant, the energy is high, the qualification feels nailed-on.

This is coming together for Ana. She seems much more confident today and there are no issues with this technically. She’s taking no chances with her long demi-cape (she caught her shoes in it apparently the other, which might be why I thought she was doing it all barefoot – they’re on today). She swishes it out with each step as she marches to the satellite stage.

I hadn’t noticed that she’s actually the first to use the transparent LED screen that descends over the arena: this is where the American mid-west images are, not the backdrop. If there’s anything to improve it’s her facial expression as she heads to the front stage – this was a rehearsal rather than performance face today. (Edit, she really turns it on by the last go, complete with whoops and yelps as she strides forward.) Otherwise, I think she does everything she can with this; it’s the song, not Ana, which is not up to par. I don’t call this as a qualifier at all.

I missed most of the first run of this as I was checking in on Montaigne’s press conference to see how she is: her recent social media has been difficult at times. It must be so difficult for her to be apart from everything going on in Rotterdam.

There seems to be some changes in the onscreen graphics – or maybe the camera is just better at picking them out? The positive messages seem more prominent (although at one point I was wondering what she meant by “bited” until I realised it was the end of the overlaid graphic instructing us that’s it prohibited to film the screen; it’s in massive lettering this year, so forgive us if some of the detail is obscured). The final montage of diverse Russian Women, now ends with the photos shaped into the words Russian Woman. It’s a great, simple effect.

The backing singers are now in shiny stage costumes, and Manizha herself has a bigger, golden headscarf. In the very final “Борются” folk-inspired chorus Manizha ad libs, but this leaves only the quieter backing vocals to pick up what, for me, is the most powerful moment of the song. If I were to suggest one change to the delegation it would be this. Keep Manizha’s powerful vocals singing this.

Brilliant fun, brilliant energy. I really do have a sneaking regard for this one. I’ve just chucked a fiver on it each way.

This needs only the briefest of updates. It’s as ready to go as when Tusse stepped off the Melodifestivalen stage. I still think it’s a potential surprise/compromise winner if the big points scatter among several different countries and this scores steadily, especially  given just how much of his potential maximum vote he scored in Melfest (a massive 91% of the available points).