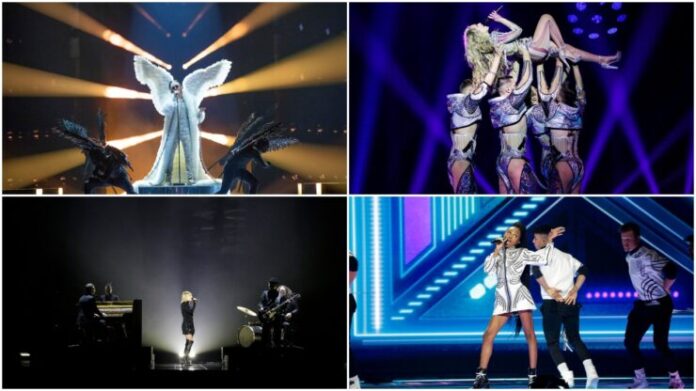 Continuing with another delegation that is highly prepared and Norway’s Tix delivers three excellent runs through. Like Lithuania and Cyprus this could be broadcast now and be the final version. There’s little to add; if you like Tix’s schtick you’ll enjoy this. I still think the performance is overblown.

This is on the money too. Albina is confident and assured in her performance. If you were to judge this as a stand-alone performance this would be (indeed it is) very good indeed. The point of this show, though, is to judge it against the other entries. We have 5 female sololists singing pop songs with 4 or 5 dancers in this half of the semi-final alone, each spaced a song apart: Cyprus, Croatia, Israel, Azerbaijan and Malta. Surely not all of these can make it in such a bunfight of a line-up? With Lithuania, Russia and Sweden bolted on from this morning, and Ukraine to come – all dead certs to qualify in my view – spaces are running out.

They might all make it, there’s just about enough places. If one or more do fall it will be interesting to see which. Croatia and Cyprus both have retro sounds, though this is in a style that’s very much enjoying a revival, whereas Cyprus is a throwback to early Gaga, though arguably more fun on stage. Perhaps this will edge it over Israel and/or Azerbaijan?

Belgium felt pretty polished in the first rehearsals. There’s little to add here, they deliver it just as competently. To be honest about now is the point where it all becomes a bit of a blur and both everything and nothing is qualifying. I can see a way this could do it, but I have to remind myself that possibility is not the same as probability, so I’m calling this as a no.

Eden performed well on Sunday but left herself some work to do. The routine is there or thereabouts, as are her vocals, including those impressive whistle notes that she seems to be able to just summon from nowhere. There are some elements, particularly the costume reveal, that felt clumsy, even superfluous, so I’m looking to see if she’s modified or even kept this.

It’s still there. It’s executed better now but I still dislike what her reveal reveals. The hair ‘crown’ she was coronated with at the end of the first rehearsal has been elevated to a permanent fixture which she now starts wearing.

I was maybe a little hasty about the vocals. There’s a couple of moments in this where they go askew, and she aborts her launch into the first whistle note in the first go with an acknowledging grimace. But by the second repetition she’s back on track.

Off-stage, Eden’s replies in her first press conference felt telling. She’s been keen to stress how she had no input into the choice of song and only got to put a flavour of herself on after it was selected – by, she was quick to add, the Israeli people. Her displeasure when it was announced as the winner was literally visible all over her face. Is this a strategic distancing herself in the belief she’s not getting through? She might be on to something.