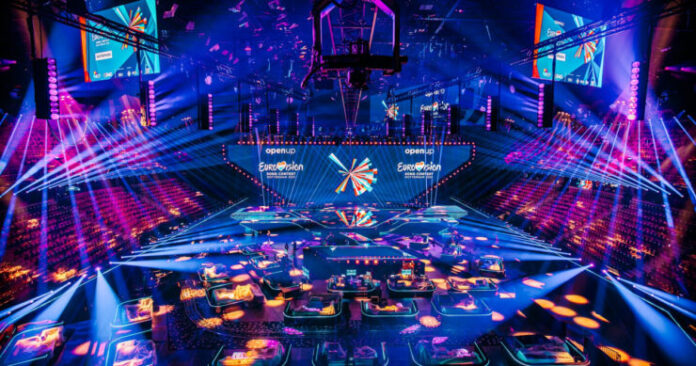 Evening troops! It’s all been satisfactorily unsatisfactory around here at the Cambridgeshire satellite press centre since lunchtime, my kickball team just about managed to squeeze out a particularly bulky promotion, and that’s probably not what you’re here for.

Everything in Eurovisionia, similarly, was delightfully not totally what I was looking for.

Montaigne from Australia was clearly not going to rehearse a performance that she recorded six weeks ago, but I’d hoped to be tossed a slightly bigger bone than one showing of a tiny bit of backstage footage. Still. She’s not getting the Eurovision experience she signed up for, apart from that one magnificent night on the Gold Coast last February, I hope she’s making what she can of it and will go for third time lucky a few years down the track. She deserves better than being the answer to an interesting Eurovision trivia question.

North Macedonia’s Vasil seems to be relying rather heavily on a novelty shirt, the odd bit of augmented reality and a cheeky smile, with a side order of keeping the tough notes under wraps for now… I hope. For the second time today, I also found myself frowning because people were obviously singing who weren’t the credited singer, and I couldn’t SEE who was doing the singing. Put people on stage, people. Put a virtual choir on the screens. Just… do SOMETHING. Otherwise I can almost guarantee that you’ll see a photograph of me underneath an “Old Man Shouts At Cloud” headline.

Then Lesley Roy from Ireland, and I could write essays on this subject, but she’s not making me at all happy. I don’t doubt you’ve heard the gist of the staging gimmick – another take on the forced perspective play that Silvan Areg came up with for Destination Eurovision a couple of years ago (and which seems to have completely disappeared from YouTube). The trouble is, Lesley’s take looks awfully high risk and very, very low reward. It would make a lot more sense if it was attached to a slightly less uptempo song about, for example a story… a story, perhaps, of somebody’s life? I’m just spitballing here.

As it is, nearly everything looked slightly off time, or misframed, or just generally not quite spit spot – AND it appeared to be horribly compromising Lesley’s capacity to actually deliver the song properly. Which is, y’know… kind of a big deal in a song contest. It may be too late to scrap the whole concept and just stand there belting out a good song while hoping for the best, so hopefully everything will be tightened up when we revisit it on Week 1 Day 5.

So yeah. I’m left just mildly grumpy (though I hope entertainingly so!), even after a delicious celebratory post-kickball-and-rehearsals dinner of gluten-free kebabs and air-fried chips followed by a Ski yogurt. Oh well.

There should be some stuff well worth getting up for on a Virtual Rotterdam Week 1 Day 2 Morning 1, and from a glance at the afternoon session it looks like we might all be gettin’ a slice of da action and smashin’ it in like a real pro, as they say in the iFollow pizza adverts.