I’m suggesting merely that when I’m crafting a filing system I like to be prepared for any and all possibilities, however crazily implausible they might seem. It’s always a useful skill in Eurovisionia. 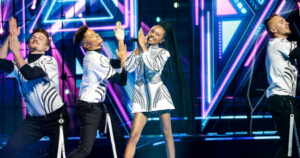 So I suppose I’d better dive straight in with Israel’s Eden Alene, a girl delivering a pop song with dancers. She’s a talented singer, and the routine all looks well-rehearsed, but the word “safe” is slightly nagging at me. It’s the entry you submit when you want to do OK but with absolutely zero risk of winning – and sometimes when you risk nothing, you risk everything. There are also enough parallels to Croatia’s entry a few minutes earlier that people might make a direct comparison – and I’m not really persuaded that Eden will win that individual battle.

Romania’s Roxen is also slightly struggling to carve out her own niche here. I like how the staging visually lifts her out of the Slough of despond (conveniently located for access to  the Swindon of misery and the Milton Keynes of impending doom) into a rather brighter future, but the interpretative dance is a bit nebulous, and in the runthrough I’ve seen she ran out of puff a couple of seconds before she ran out of words that still needed to be sung. It ought to be on my ‘definitely’ pile but only makes it to my ‘maybes’.

Efendi from Azerbaijan was getting lots of compliments from people with Turkic sounding names in the press centre chat, but there were doubts elsewhere. I was looking for sensuality and smoulder and having all my deepest secrets about the inner workings of my Scrabble study plan forced out of me by sheer seductive charm, but I ended up feeling more like I’d just been asked very politely if I could help with her maths homework. I mean, obviously yes, I’m not averse to a bit of the old differential calculus (not a euphemism), but if it came down to a Great European Seduce Off I think it’d still be Anne Karine Strom that’d get offered my Hollywood Handshake (also not a euphemism).

The first thing that came into my mind on my very first glimpse of Ukraine’s Go_A was “Why is she wearing Orville the Duck?”. The answer is, of course, because a mostly monochrome staging needed a couple of pops of colour to invite people to pay attention, and honestly it was the first of many things over the course of three minutes that just worked (even though a decent number of them probably shouldn’t have). The progressively increasing urgency is visually signalled at every stage, and I’m not alone in now seeing it as the big WOW moment in an already strong semifinal. I’m wary of press centre hypes because I’m so very, very old, but I confess that I have had a little miniature betique on this. Never underestimate Ukraine.

Malta’s Destiny arrived in Rotterdam as favourite both with myself and the bookies. I’d priced in a fabulously creative staging however, and I was pretty disappointed with what I saw. In an anthem to being your own special creation in your own unique way, I didn’t see very much that made me nod my head and say “Yep, I’m pretty sure that Destiny had some creative input in that bit.” It’s all ended up as something a bit been there done that did alright, where I was looking for Queen Destiny grabbing my telephone and basically voting for herself on my behalf with unstoppable force of personality. She’s 100% still in the race. But I’m not so sure that she’s the front-runner any more.

Ah well. Are there many more of these days still to do? I’m worn out already and we’ve not even had a sighting of Jendrik yet. Still, tomorrow is another Week 1 Day 3 Morning 1 and Week 1 Day 3 Afternoon 1.