So while I’m continuing to sift the semifinalists into those that will proceed to the International Final and those who who won’t, I received a timely reminder from Timehop today about just how DAMNED good I am at this.

How good I sometimes am at this, then. In my defence, 2011 was a difficult year to predict and every predictor did equally badly, that’s my line, and with most of the 2011 interwebs now being reduced to digital dust, I’m sticking to it. It’s not like I’ve ever lost my shirt backing Jonsi in 2004 or Severina in 2006, after all, AS FAR AS WHAT REMAINS OF THE INTERNET KNOWS.

Tornike’s a fantastic singer. You is a lovely song. But in combination, it’s turning into the kind of ploy Simon Cowell comes up with when the gnarly old rocker on The X Factor has reached his use-by date. GEORGIA is probably my most confident NQ in either semifinal at this stage. 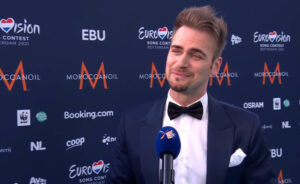 ESTONIA is also my most confident NQ in either semifinal at this stage. When you get the draw of doom, the contest gets cancelled, you win the chance to do it again and they give you the draw of doom AGAIN… then that might be the producers dropping a hint that the viewers ought to be writing down in their copybooks.

I’ll lose one more before I start adopting an insouciant air of puckish positivity again. Samanta Tina needed five things in her staging – queen, night, blood moon, rising, and being dressed in literally any other colour. She hasn’t quite made it up to five in a row. This isn’t one of those years that LATVIA gets a second outing.

There are a good number that I’ve got no worries about though, so let’s throw some bouquets.

SAN MARINO are basically failureproof in this bit, and my computer has crashed 7 times before it allowed me to write that sentence. If the entire internet gets deleted shortly after I post this, soz, my bad.

I have tiny worries that AUSTRIA might be about to give me another of my Jonsi moments, but plenty of sane people also appear to be sold on him, I basically refuse to countenance any possibility of him going home early, so he’s through.

ICELAND – never in doubt for this bit. Just a question of whether there’s still enough of a wave to be ridden to take them all the way. There might be.

ALBANIA took my breath away in second rehearsals. Everything about it has been done before, but it’s being done so darned well and Anxhela is a star. Definitely progressing.

BULGARIA are starting to look like the class act of the year. I’m still not totally sold on the song, but it’s the perfect vehicle for a masterclass in 3-minute storytelling.

SWITZERLAND are also a pretty obvious qualifier. Gjon draws everyone in very nicely, and he’ll be fine.

Let me check my notes here. I think I need another 4 qualifiers and another 4 to go home, and I’ve still got Czech Republic, Greece, Poland, Moldova, Serbia, Portugal, Finland and Denmark to think about. Ooh, nasty. 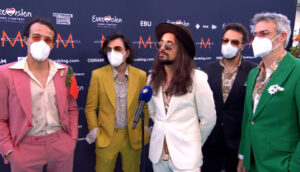 The Black Mamba for PORTUGAL are splendid. Jury bait but with something for you watching at home to attach yourselves to as well. They’ll keep going.

Benny isn’t really doing enough to escape the drag of slot 3. It’s always possible, but he seems just a little bit too laid-back to fight his way through the scrap. CZECH REPUBLIC to not qualify.

I have a funny hunch that at least one – possibly both – of Denmark and Poland are going to be annoying qualifiers, but I can’t then find 3 of the remaining 4 who aren’t. In a simple head-to-head between the two, Poland’s song is in English and Poland can also bank a reliable televote, whereas Denmark, in spite of going last, has a line Du si’r noget, jeg ikk’ ka’ høre, mens rytmen kører, which sounds exactly like huurdy-guurdy-duurdy-kooor to uninitiated heathens like my good self.

It’s harsh reasoning, but that’s Eurovision. DENMARK to go home, POLAND to be a surprise qualifier.

I mean, FINLAND. I’m really seeing very little for anybody to enjoy there, but I’m deluding myself if I say they’re not going through, aren’t I? Ah, go on. Sod it. They’re qualifying.

And then I leave myself in a terrible quandary, because I really, really can’t picture two of the remaining Greece, Moldova and Serbia going home early. Yet here I am. Uh-oh. What a trilemma!

I… am… going to fall back on one of the fundamental principles of serviettology, and that’s to always declare Greece as a qualifier unless they’ve given you a REALLY good reason not to. Stefania hasn’t. GREECE to the final.

I suppose there’s no chance that we can maybe have that 7 hour long grand final after all, please, because I’m leaving behind a lot of very strong entries here and it’s bothering me?

Finalists from semi 2 then: SAN MARINO, GREECE, AUSTRIA, POLAND, ICELAND, ALBANIA, PORTUGAL, BULGARIA, FINLAND, SWITZERLAND. And if you ask me again this time tomorrow I’ll probably gently explain that I’m a wee bit busy in the virtual press centre drinking in the joys of the 1st jury semifinal – or at the very least, drinking in. It’s been a very long Fortnight 1.