Well Ireland, that was a bit of a let down. They took 26 minutes to produce a performance and… well the picture of a dog’s breakfast below is very apt. 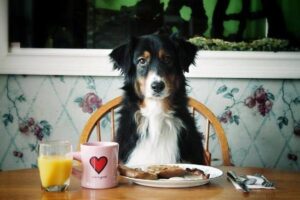 The whole point of this song is in the title, ‘Maps’, and she’s singing about finding love in all the wrong places and needing to work her way out of it.

What it doesn’t need is a dog’s breakfast of a staging consisting chiefly of over thought out story book elements, precision timed but not precision executed choreography including a treadmill, a flick book (the timing of which didn’t work) and some sort of flying contraption gizmo which is being saved till rehearsal two.

It looked messy. It looked like RTE has had a complete brain fart and gone “eeerm, stuff, anything, story, flying…” at a production meeting and forgot completely that someone who has waited two years has actually got to sing what is, in effect, a difficult song *and* remember where to be *and* interact with flying objects.

It needs a Map motif, cos you’re singing about one after all, and it needs Lesley to have a more powerful vocal (and possibly more accurate vocals as well but I’ll forgive her that with all the things she is having to remember), but this proves what I said about the preview video: her voice is not strong enough for this song. It’s as weak on a Saturday afternoon as it was on a professionally produced preview video. This is in trouble and it’s too late for a re-think.  It needs to be tightened up and it needs beefing up otherwise Ireland are going home early.

In the style of Spitting Image