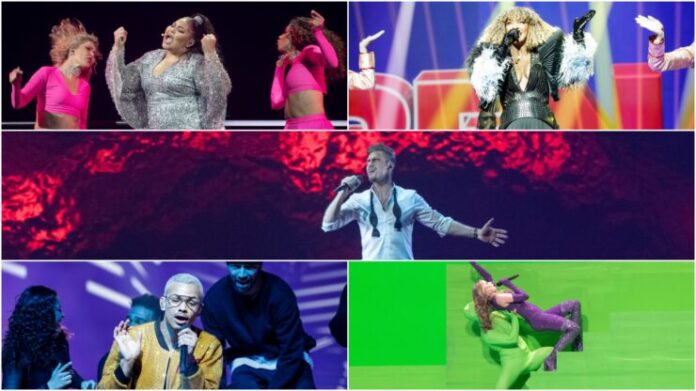 Day 6 (I know!) and it’s a biggie! Ten second rehearsals and our first look at the Big 5 and the host nation. Lots to get through. I’ll do two lots of five then individual posts for the automatic finalists.

Costume change klaxon! Destiny’s in a new frock. It’s a silver dress with some fringing and big sleeves. It’s very short, and on the bottom half she’s swapped the pink boots for neon pink stockings. The dancers are in the same neon pink. It’s not clear yet what’s prompted the change: it could have been planned all along to test two outfits, or it could be in response to some of the awful backlash social media fiends have unleashed. I’d say the latter may be likely as Destiny took to her own pages to defend her choice after Sunday’s first rehearsal. Plenty will no doubt be written, and I’ve no wish to fuel it, especially as I’m so on board with her message, though I do think the stockings add an unnecessary tawdry quality to the overall look.

One of the criteria jurors are asked to assess is vocal ability and you’d be hard pushed to find any musical professional who could mark her down on this. She absolutely smashes it!

I’m a liker, not a lover, of the song; I’m far more invested in Destiny than her musical vehicle, though I do see her as the best chance Malta has ever had for a win. I’d snatch a week in Valetta off you like a shot mind. I think she’s upped her chances again with this rehearsal.

Senhit has been doing some early morning trolling with a Tweet of pictures if Flo Rida and question marks. Brilliantly she’s extended this into her performance by plastering them all over her religious iconography elevating Mr Rida to sainthood. She chucks in mention of him too, building the speculation. Bravo!

She arrived in Rotterdam ready, and proves it once again today. This feels like it has even more energy than on Sunday and is three minutes of joyful fun. Only the addition of Mr Rida could lift this further now, and he has just under a week to go to get here to join her for the semi-final. I hope he does; it would feel like her #FreakyTripToRotterdam would be complete, and with it Senhit’s spectacular decade-long transformation from unspectacular jazz singer to high-camp iconic diva. Who could have guessed that the crowning glory of Eurovision 2021 would be an American rapper?

Oh, and I don’t know what it is but there’s something about those dancers in the star-eyed balaclavas and glittery bovver-boots that’s oddly captivating… #Mask4NotVeryMasc

Estonia left themselves with little to do from Sunday. Uku’s perfectly competent here, well prepared and looking comfortable on stage. The set is a little dark, with the mood clouded further by the stormy background. It does suit the torment of the song, with Uku knowing it’s a storm of his own making as he sings of knowing he shouldn’t be staying in a particular relationship.

I think Estonia has made the most of what they have here; Uku sings it very well, and it’s a fitting presentation. The darkness of the song may be a challenge, as may both the position in the running order and having to follow the high energy of Senhit. Two of those things were always out of Uku’s hands entirely and it’s now two months too late to change the third. This is what Estonia has; they now have to hope it’s enough. Sadly I don’t think it will be.

After Sunday’s rehearsals Benny’s natural energy shone through at time, though I felt he needed some work to engage better with the camera. Today he’s got his specs on; maybe they will help him see where he’s meant to be looking? He must have found it as he’s taken them off for the last go.

Bags more connection and energy today and this is all coming together very nicely. He’s just oozing his charm all over this stage. I still absolutely love this.

I might be a bit biased because what I really love is Benny. I’m making a list of all the reasons he should let me have it and so far, there’s not a single reason why not.

Greece were already quite polished on Sunday, so today just feels like fine-tuning. Somebody’s re-stitched the rent in Stefania’s catsuit where the mesh panel across her midriff had ripped away.

The initial gimmick of the greenscreen has worn off on me now. I need to be objective and remember most people will be seeing it for the first time on the night. You can see the bits of the bodies that are meant to be obscured in the first dance part (although to be fair they’ve done quite a good job with disguising the staircase). I think it just looks a bit silly though.

But job done on making (yet another) female-led, 80s-hued pop track with a quart-or quintet of dancers stand out.

There’s an hour’s break for lunch now. There are some perks to working from home; Waitrose has just texted to say Timothy is 15 minutes away with my grocery delivery. That’s good, it will be nice to have something vaguely healthy; I’ve had to eat my own body weight in stroopwafels.