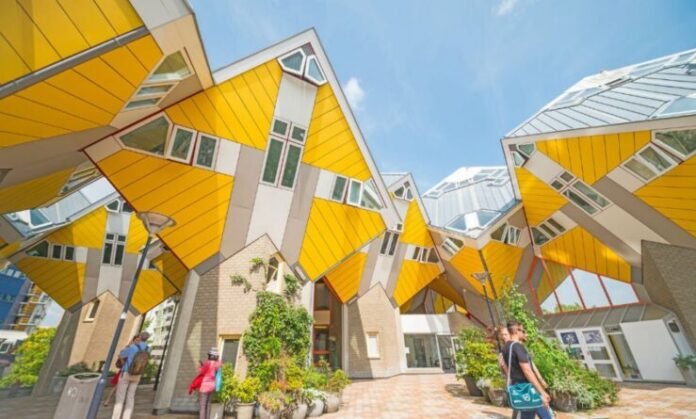 It’s not Rotterdam, though. It’s East London. Not far from, erm, RotterdEast Ham, if you will. And but a skip on the DLR to City Airport whence I would have been winging my way to the action last year had we not been grounded. But I’m excited wherever we are because it’s EUROVISION again! Whoop!

I’m all set up, in the RotterdEast Ham Press Centre. I’ve got my virtual lanyard slung figuratively round my neck, and all the free (after I’ve paid for it in the supermarket) tea, coffee, stroopwafel and kaas an Oneuropean Boy could ever need.

(I’m making it up about the stroopwafel and kaas, as I’ve just been struck by the crushing realisation that in my rush to complete my actual job so I can take two weeks off and become Official Press™ for the next fortnight I’ve forgotten to plan my Dutch themed snacks. I’ll just send out for chips later; I mean I always have them at 4am on the way home from, well, let’s call it “somewhere”, whenever I’m in Amsterdam, so they’re traditional Dutch cuisine, right?)

Whilst we may be only stumbled to our living rooms this year, the job of the RotterdEast Ham Press Centre remains to have a bijou vada at the Eurovision rehearsals and let you know what you’ll be getting. That Phil has been kind enough to have me back again – the first time since Lisbon for me – for which I thank him, and you, for indulging me once more.

Y’all will know my views on the songs from my Countdown reviews; like many I don’t yet see a clear frontrunner, so as this week unfolds we’ll get to see our first glimpses of how the on-stage performances will look, and more than ever I feel everything rests on this for 2021.

We have the added risk factor that any of the delegations could find themselves in quarantine by the live shows, rendering everything about the rehearsals moot as we switch to their pre-recorded back up tape. We already know this is how Australia need to participate, so let’s hope everyone else still gets to present their vision on the live stage. The organisers have done such a great job to get them there and provide a working solution, when many felt we’d be only Zooming in the songs this year. Bravo! It’s really a top job.

So, our schedule today is Lithuania, Slovenia, Russia, Sweden, Australia (though I imagine they won’t stream us the tape), North Macedonia and Ireland. Russia’s the one to watch for me, and I’m looking forward to seeing what Ireland bring to the stage. Now, let’s get ready for the inevitable technical teething problems of the first day. Maybe we’ll get lucky and have to miss Lithuania…?

Follow us here as we bring you our reactions, and thank you, as ever, for choosing to read our views.

Rotterdammer here. The city is dressed up for Eurovision. Without the parties. But hey, can’t have it all these days.